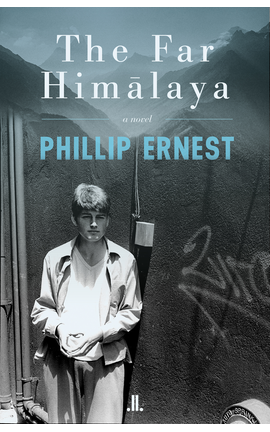 Young and homeless on the streets of Toronto, Benjamin Doheney is sustained by an unusual sources of strength: his devotion to Sanskrit, the ancient literary language of India. Together with Aditi, a student of Sanskrit at the University of Toronto, he dreams of a future with her in India, a land in which she has her own troubled history. Before they can move on, they must extricate her from the clutches of her malevolent PhD supervisor. When a murder on campus threatens to draw the police’s attention to Ben and his friends, events spiral out of control, drawing them all towards a possibly bloody culmination in which the couple’s hopes for a distant future peace may not survive.

Born in 1970, Phillip Ernest grew up in Northern Ontario. Fleeing home at the age of fifteen, he lived on Toronto’s skid row until he was twenty-eight. He learned Sanskrit from the book Teach Yourself Sanskrit, and later earned a BA in South Asian Studies from the University of Toronto and a PhD in Sanskrit from Cambridge University, with a dissertation on the Sanskrit epic Mahabharata. Marrying a woman from Pune, India, in 2006, he lived in that city until 2016, working first in the Bhandarkar Oriental Research Institute, then as a writer and editor at Dilip Oak Academy. His first novel, The Vetala, was published in 2018, and he lives with his wife in Bengaluru, India.

Similarly, the didactic component of Phillip Ernest’s The Far Himalaya is at times distancing for the reader, yet it successfully integrates the ancient epic Mah?bh?rata with the no-less-troubling wars on the streets of Toronto and in the hallways of the University of Toronto. Moreover, that blend of intimacy and distance seems appropriate, since the primary character, Ben, and his mentor, “Moksha,” explore their places as both insiders and outsiders in these locales. Ernest has noted in an interview with the publisher (accessible online here) that he is fascinated with art as an instrument for self-exploration, so that his weaving of interior and “remote” worlds (like the Mah?bh?rata) holds “tragedy and comedy in one hand and the other at the same moment.” The centre is more profoundly the university campus and its politics, reflecting violence, addiction, and misuse of power both within and outside the academy. That focus is prominent especially in the relationship of Ben and Aditi, a doctoral student in East Asian studies.

Ernest has also commented that his construction of this intimate relationship is one of the novel’s weaknesses, as his portrayal of this relationship idealizes the bond but leaves Aditi’s character largely enigmatic and underdeveloped. For instance, the rationale for Ben’s shadow-writing role in Aditi’s dissertation, with its emphasis on desire, can be somewhat unsettling. On the other side, the mapping of Toronto’s streets, and (further) the ashram on Lake Simcoe creates an intriguing pilgrimage. While the couple does inevitably journey to the “Far Himalaya” in South Asia, the labyrinth in Toronto becomes a more profound and sacred space—the “devabh?mi” or “land of the gods.”

Also evocative is the interplay of hallucinogenic substances and altered states of consciousness, an interplay that results in a Canadian “magic realism,” even with a third-person narrator. In many episodes, the reader is caught in the web of imagined reality, and in moments of transformation from individual to character type, and to archetype. While this translation is sometimes rather heavy-handed, Ernest manages to create an approach that is both riveting and powerful. The limited-omniscient perspective invites the reader on an often terrifying, yet awe-inspiring, journey through the labyrinth of material conditions in Toronto.
Read more.
October 2020, Canadian Literature Quarterly

The similarity of the promotional blurb on the back cover of this novel to the author’s biography suggests that much of what is in The Far Himalaya is based on author Phillip Ernest’s real life.

...This book is neither long nor—on the surface—deeply philosophical, but the issues it raises linger in the mind long after the last page has been read.
Read more.
February 2020, Ottawa Review of Books

I quite liked The Far Himalaya for it was a very different type of story, particularly the settings: either on the streets or in the halls of academia, from sleeping on a park bench to an asrama in the mystic Himalayas. All this serves to give an otherwise conventional story a singular dynamic that elevates it beyond the norm. Recommended as a different or alternative type of read.
Read more.
November 2019, The Miramichi Reader