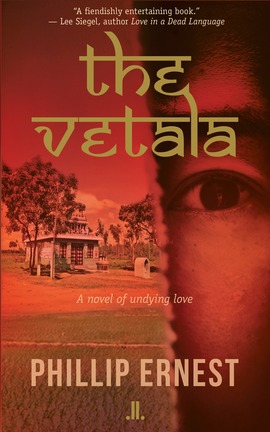 Nada Marjanovic, professor of Sanskrit at the University of Zagreb, has spent more than twenty years translating an obscure text on the vetala, a parasitic, vampire-like being that possesses the bodies of his victims. When her mentor and collaborator in the Indian city of Pune dies, she finds herself face-to-face with the undead that the text describes, an evil which long ago killed her lover – and set her on the path of an obsessive scholarly revenge. She must rely on her intellect, mythic lore, and even dreams to piece together the mystery of the manuscript.

The vetala’s opposition grows increasingly violent as Nada nears the book’s conclusion, and with the help of two colleagues, struggles to decipher its climactic secret, which would allow her to exorcise the demon at last – freeing not only the mysterious man whom he has possessed for centuries, but also, perhaps, her own imprisoned and forgotten love. Suspenseful and unforgettable, Phillip Ernest’s debut novel captures the most universal elements of human experience – even the monsters we face.

Born in 1970, Phillip Ernest grew up in Northern Ontario. Fleeing home at the age of fifteen, he lived on Toronto’s skid row until he was twenty-eight. He learned Sanskrit from the book Teach Yourself Sanskrit, and later earned a BA in South Asian Studies from the University of Toronto and a PhD in Sanskrit from Cambridge University, with a dissertation on the Sanskrit epic Mahabharata. Marrying a woman from Pune, India, in 2006, he lived in that city until 2016, working first in the Bhandarkar Oriental Research Institute, then as a writer and editor at Dilip Oak Academy. His second novel, The Far Himalaya, was published in 2018 by Linda Leith Publishing. He lives with his wife in Bengaluru, India.
[Photo: David Ernest]

The Vetala was chosen by All Lit Up for their Read Harder Challenge series.

"I devoured this book in one sitting. The story is at once familiar to vampire fans—a love that burns eternal—but at the same time, the traditions related to the Sanskrit Vetala myth and the setting of Pune, India, bring a unique quality to this novel. I am also a sucker for books about books. The Vetala was the perfect spooky read for October."
October 2020, All Lit Up

Author blog post: "The remembering of a forgotten life"

The Vetala, my first novel, arose out of my relationship with Pune like the return to consciousness of an almost forgotten love. When I first saw Pune in 2005, I had already known for some years that I was destined to go there. While studying Sanskrit in my home city of Toronto, Canada, I became obsessed early on with the Mahabharata, and soon came to know that Pune was the home of the Bhandarkar Oriental Research Institute, historically the greatest centre of Mahabharata studies in the world. After my marriage to a Punekar in 2006, I had the honour of working in the Institute’sMahabharata department for a couple of years, but was forced by necessity to take a more remunerative job at the nearby Dilip Oak Academy, just down Bhandarkar Road from the Institute. I was grateful for the job, but I knew I was losing touch with my svadharma. I could actually see the Institute from the Academy’s window, like a beloved ghost from a longed-for past.
Read more.
April 2019, A Writer's Oasis

Taliesin Blogspot
Author Phillip Ernest is a Sanskrit scholar from Canada, living in India, and has chosen the vetala as the focus of this novel and the world of Sanskrit scholarship as its stage. The book itself is a curious (in a good way) mix of supernatural horror, academia, high octane action (with one scene particularly coming to mind) and romance. It all merges together rather nicely and the book hurtles along with a sprightly pace... Definitely worth your time, this book touches on a variety of the vampire that deserves more exposure. 7.5 out of 10
Read more.
November 2018, Taliesin Meets the Vampires

Richard King, CBC
Richard King‏ @richardking18 1
@cbcHomerun we talked about how much I enjoyed The Vetala  by Phillip Ernest a masterfully told thriller about a Sanskrit manuscript, the undead and love. @LL_Publishing
March 12, 2018

“The Vetala is a fiendishly entertaining book in which a deep knowledge of South Asian lore and literature serves a lusciously horrifying evocation of a macabre and eerie India in which human love provides the only promise of possible redemption from a terror that persists across centuries of transmigrating spirits.” -- Lee Siegel, author of Love in a Dead Language