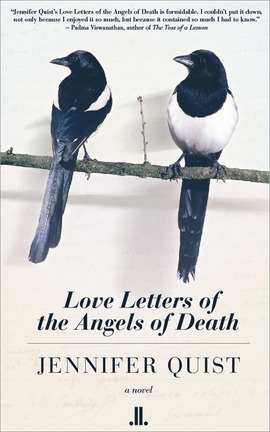 Jennifer Quist is a novelist, poet, and columnist living in Edmonton, Alberta. Nominated for the Writers’ Guild of Alberta’s Howard O’Hagan Award for her short fiction “Fish Story,” she has had her work published in The Globe and Mail, The National Post, Maclean’s, and Today’s Parent, and has written and voiced introspective personal essays for the CBC Radio One programs Definitely Not the Opera and Tapestry. Her first novel, Love Letters of the Angels of Death (LLP, 2013) nominated for the 2015 International Dublin IMPAC Literary Award and Quist was named the Alberta Lieutenant Governor's Emerging Artist of the Year in 2014. Her other two novels are Sistering (LLP, 2015), longlisted for the Alberta Reader's Choice, and The Apocalypse of Morgan Turner (LLP, 2018).