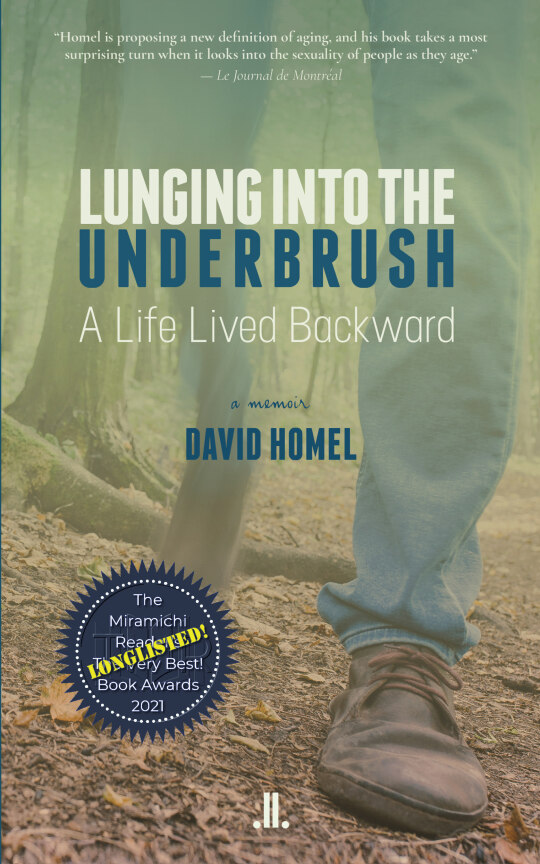 Lunging into the Underbrush: A Life Lived Backward

In 1970, David Homel escaped the American draft by moving to Paris. But a hiking accident in Spain led to a harrowing journey through botched surgeries, opiate addiction, the loneliness of a crippled traveler, and the constant pain that would define his life for years to come. Today, planning to stay in the game as long as possible, he has a few ideas about how to do just that.

By confronting body image issues, performance anxiety, and the challenges of desire, Homel draws an affecting portrait of the battle between Eros and Melancholy. Which one will prevail in this story we call our lives?

David Homel was born in Chicago in 1952 and left in 1970 for Paris, living in Europe the next few years on odd jobs and odder couches. He has published eight novels, from Electrical Storms in 1988 to The Teardown, which won the Paragraph Hugh MacLennan Prize for Fiction in 2019. He has also written young adult fiction with Marie-Louise Gay, directed documentary films, worked in TV production, been a literary translator, journalist, and creative writing teacher. Lunging into the Underbrush is his first book of non-fiction. He lives in Montreal.

Shortlist: J. I. Segal Award for Best Quebec Book on a Jewish Theme

Congratulations to David Homel for his nomination to the 2022 J. I. Segal Award for Best Quebec Book on a Jewish Theme.
Read more.
September 2022, Jewish Public Library

Best known as a novelist, this is David Homel's first foray into memoir, and it turns out he had a lot stored up. His story flows from him in a torrent: years growing up in Chicago, a skinny, scrappy kid, to a soundtrack of Bob Dylan, Joni Mitchell, and Neil Young; moving to Europe to avoid the draft, leading to an accident at 18 years old that dramatically altered his life; and later, abandoning the US, first for Toronto and then Montreal, which he still calls home.

The torturous operations he undergoes as a result of the accident, not to mention an accompanying addiction to painkillers, are at the heart of this gripping story In a sense, he starts out as a young person with the physical afflictions of an old man, and becomes rejuvinated or, as he puts it, rehabilitated, even as he ages.

In the telling, he reveals his failings, limitations and a few contradictions, but also his courage and determination. And ends the book with an exploration of the aging process, investigating retirement, sports, love and sex.
August 2021, Montreal Centre-Ville

You’ve had many books published over the years and have been awarded many times. Is there a particular highlight of your career that you are most proud of? Is peer recognition important for you as a writer, translator, educator, etc. to keep on doing what you’re doing?

Homel: Peer recognition means friends, and that’s important. Lunging is, among other things, a book about those people who have helped me along the way. A book of gratitude. You ask about pride. I was proud of Electrical Storms in 1988 because I’d never written a novel before, and it was published by a major house. I was proud of my first kids’ novel in 2006, Travels with my Family, because I’d never written for children before. And proud of Lunging because I had never written a non-fiction book. You get the picture: keep doing things differently.

What is most refreshing for this reviewer is Homel’s innate understanding of how women experience aging, image, and how affection trumps sexual prowess. For men worried about performance, about aging, Homel’s understanding is a must-read.

Finally, he also speaks to the importance of how we must be “generous to the selves we have become,” which he summarizes by writing: “It might sound unlikely, but this whole chronicle is a record of unlikely events reaching an unexpected conclusion.”

I would add that although this is not a self-help book, it is a guide for those of us who try to draw on lessons from our lives to emerge stronger and happier at any age.
Read more.
May 2021, The Montreal Review of Books

The impression this brief, delicately written memoir leaves is of having spent a few hours with a wordsmith unconcerned with that particular talent, but rather focused on sharing his most difficult challenges, the ugliest moments of his life, his fears, his greatest failings and the long path to various, cathartic learnings. Homel, the novelist, filmmaker, literary translator, journalist and creative writing teacher, is in a sense not really present in these pages. "Here are the challenges I faced and how they almost did me in," he seems to want to tell us, daring to share everything that has hurt him, and there was a good deal of it sprinkled throughout is life. Homel’s recounting of these episodes, the worst ones painted with such fine, introspective brushstrokes, must have hurt him all over again as he did so.

...With Lunging Into the Underbrush, Homel offers a unique exploration of a young man growing through tremendous challenge, becoming an older man that even he is not fully at ease with, all toward an understanding of the importance of being kind to ourselves, to forgive ourselves, no matter how much pain our errors may bring, and to be unafraid of who we may become.

Where David Homel may choose to think he has failed in his own life, he now triumphs with Lunging in the Underbrush. This is a true story built on the framework of human resilience and kindness, and plainly a gripping read.

“I don’t want this to come across as some kind of redemption story.” David Homel is talking about his new memoir, and the tack he’s taking might be somewhat surprising. After all, one of the foundational tenets of contemporary popular culture is that everybody loves a redemption story.

“It’s not about that, though,” the Montreal writer insisted. “It’s about what happens over time, and what we do to stay in the game.”

Notably, eight novels into a multifarious career, the 68-year-old Homel is now writing specifically about himself. The timing, as he describes it, was right.

“I had more fun with this book than I’ve ever had with any book, because I wasn’t constrained by plot and character and narrative arc, all those things they teach in writing school,” he said. “Most of it happened so long ago that it was like writing about someone else. And of course, there is, in fact, a narrative arc: the main character is going to die, but then he doesn’t die, and everything follows from that.”

... Roughly halfway through, Lunging Into the Underbrush pivots from a more-or-less linear memoir into something else: a meditation on aging in a culture that still places a premium on youth. Formally it’s a risky strategy, but Homel more than gets away with it, because the transition feels organic: The life lessons applied in the second half grow directly out of adversity and misadventure experienced in the first.

... A motif in the book is the need, as Homel writes, to “be indulgent with yourself and others. I have some friends who are bitter toward their past selves,” he said. “But we have to forgive the selves that we were in order to enjoy what we have left. Of course, I don’t always succeed in that.”

... The book’s subtitle, he said, is more straightforward than it might appear. “Basically, I’ve become stronger, not weaker, as I’ve grown up and gotten older.”

There’s another interpretation, too: The young Homel, who was in some senses an old soul, now gives child-like spontaneity and openness as much rein as possible.

“I hadn’t thought of it that way, but sure. Keep playing. In all senses of the word.”

Opposition to the U.S. War in Vietnam and the conscription of young men to sustain it rattled the foundations of American life in the late 1960s and early 1970s and led  thousands of them, including Chicago-born David Homel, to settle in Canada.

Recollections of those turbulent times is the kicking off point for Homel’s first non-fiction book, a remarkable, intimate, and deeply reflective memoir of his teenaged years in his home town and his eventually settling in Montreal, raising a family, and establishing himself as a successful novelist, literary translator, and creative writing teacher.

The son of a Jewish family of modest means, young David was determined to resist the draft and found a way out by accessing the classification known as Draft Board 000, revealed to him by a draft counselor. This little-known escape hatch for American college students to study abroad was tailored, Homel notes, for the sons of industrialist, diplomats, and military personnel, and, as he says with a sarcastic wink, “ just the kind of young men not to be found in the jungles of Nam.”
Read more.
February 2021, The Senior Times

Hot off the press!

If I have to age, I hope I do it the way David Homel has: kicking and screaming and laughing at the demons. In Lunging, he reminds us that aging is just another word for growing, and that to grow is to remain vitally alive.
––Wayne Grady, Up From Freedom

David Homel is on fire again. This ripping memoir is a philosophical review of a life lived intensely, as Homel attempts to uncover the life that he has lived. Lunging into the Underbrush is so fascinating it almost reads like a thriller.
––Brian Brett, Trauma Farm

Homel is proposing a new definition of aging, and his book takes a most surprising turn when it looks into the sexuality of people as they grow older.
––JOURNAL DE MONTREAL