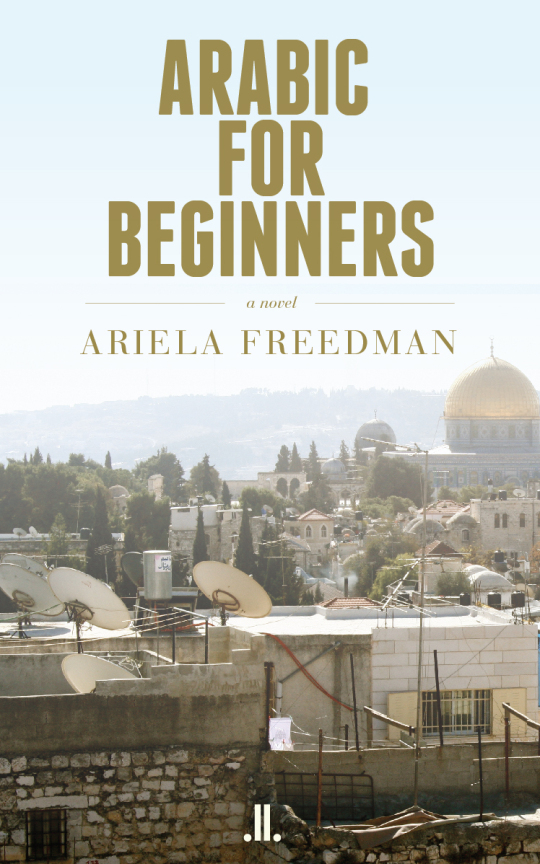 When Hannah accompanies her husband and small children to Jerusalem for the year, she becomes fascinated with a group of expat women at her son’s daycare, as well as a young Palestinian woman named Jenna. As she grows close to Jenna, she starts to question her own marriage and her relationship to Israel. A novel of domestic and political ambivalence, Arabic for Beginners is about marriage, motherhood, friendship, nation, and the complicated ways we think of home.

Ariela Freedman was born in Brooklyn and has lived in Jerusalem, New York, Calgary, London, and Montreal. Her reviews and poems have appeared in Vallum, carte blanche, The Cincinnati Review and other publications, and she was selected to participate in the Quebec Writers’ Federation’s 2014 Mentorship Program. She has a Ph.D. from New York University and teaches literature at Concordia’s Liberal Arts College in Montreal, where she lives with her husband and two sons. Arabic for Beginners, her first novel, was shortlisted for the QWF First Book Prize and named one of Quill & Quire's Best Books of 2017. Her second novel, A Joy To Be Hidden, was published in 2019.

"Arabic for Beginners brings into sharp relief a young mother’s sabbatical year in Jerusalem in the era of the Gaza war. This is a brave, intelligent and impressive literary debut.”
—Elaine Kalman Naves, author of The Book of Faith

"This account of a Canadian family's year in Israel is a study of tensions both national and interpersonal, and of the reasons relationships survive or fade away. Freedman's subtle, graceful prose spans the large and the small, the wondrous and the quotidien, as it explores the question of how certain places––and certain people––come to feel home."
––Abigail Deutsch, winner, Shattuck Prize for Criticism

Arabic for Beginners named one of Quill & Quire's Best Books of 2017.
"In Arabic for Beginners – her affecting, polished, and deeply confident debut novel – Ariela Freedman presents the Middle East conflict as we’ve rarely seen it, through the eyes of an ambivalent wife and mother. Freedman’s prose is so fluid and flawless that I felt I could trust her, paragraph after paragraph, to take me wherever she wanted to go."
– Mark Sampson, Quill & Quire

"Almost halfway into Arabic for Beginners, Hannah, furious with yet another instance of casual racism, asks, "How could everyone pretend that living like this was normal?" "This" is her life in Jerusalem, having returned to Israel for the first time since a teenager, now with young children in tow as her husband takes a year-long university appointment. The story then jumps to one of Hannah's memories from New York: a young black man whooping and kicking on a subway platform, fellow transit-goers forming an invisible cordon sanitaire around him, wary of someone they presume violent. A damning comparison: How could anyone pretend living like this was normal? After Hannah befriends Jenna, a Palestinian woman, another friend accuses Hannah of being "an anthropological friend, a perpetual voyeur," but Hannah, though a sharp observer of hypocrisy and paradox, is hardly disinterested – she's implicated. Freedman allows her character little leniency in navigating the unease this arouses – a fine debut novel of home, family and nation worked through a story of personal entanglement."
––Jade Colbert, The Globe and Mail, June 9, 2017.

Ariela Freedman's "book is a nuanced and penetrating exploration of life in Israel today. Billed on its cover as a novel, Arabic for Beginners reads more like a memoir than fiction. But whatever the genre, it’s well worth reading."
–– Claire Holden Rothman, Montreal Review of Books