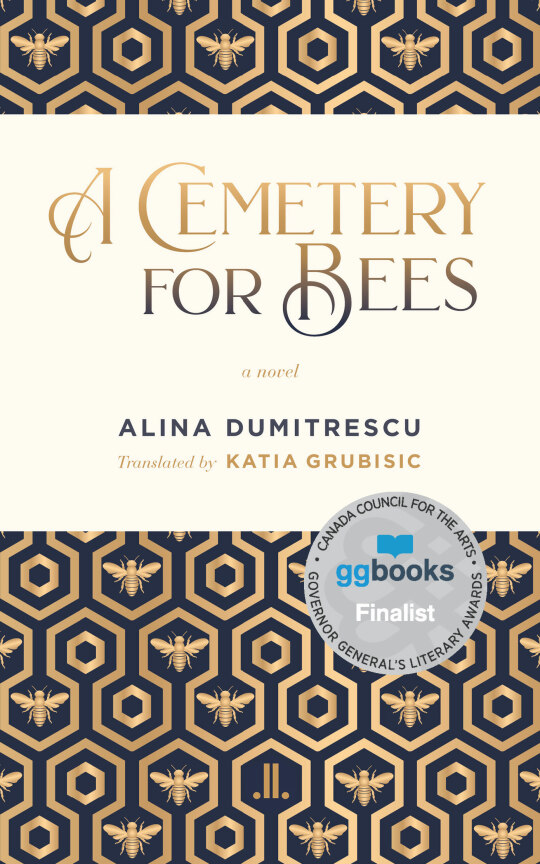 A Cemetery for Bees

This autobiographical novel traces a woman's journey from her youth in Socialist Eastern Europe to her transplanted life in Montreal, Canada. She is a precocious, thoughtful child, whose early life in Romania is marked by the scarcities of the time and the political games needed to survive, but she is not unhappy. Placed around her family’s house are hives—the bees discourage the secret police from visiting too often—and the bees provide both a childish diversion and an overarching metaphor for departure and home.

An elegant, candid book, A Cemetery for Bees is an elegy for childhood, a declaration of francophile love, and a complicated look at who we are, who we were, and where we might find ourselves.

FINALIST for the 2021 Governor General's Literary Award for Translation

Alina Dumitrescu was born in the former Socialist Republic of Romania, and emigrated to Montréal in 1988, shortly before the fall of the Ceausescu regime. Her schooling was not recognized in her adoptive country, and she undertook CEGEP and university studies in Québec. She began publishing poetry and short fiction in French in the 1990s. Le cimetière des abeilles was published by Triptyque in 2016, and was a finalist at the Festival du premier roman de Chambéry and won the Blue Metropolis/Conseil des arts de Montréal Diversity Prize.

Katia Grubisic is a writer, editor, and translator. She was coordinator of the Atwater Poetry Project reading series, and was a founding member of the editorial board for the Icehouse Poetry imprint at Goose Lane Editions. Her own work has appeared in various Canadian and international publications. She has been a finalist for the Governor General's Literary Award for translation, and her collection of poems What if red ran out won the Gerald Lampert award for best first book. Her translation of A Cemetery for Bees was a finalist for the Governor General Literary Awards in 2021.

I've been interested in communist Romania since I took a senior seminar in undergrad which, among other things, we examined the Securitate in Romania during the dying years of Ceaucescu, and my professor had some experience with, as a young woman in Romania at that time, who had parents who defected to Canada. So I was very keen to read A Cemetery for Bees by Alina Dumitrescu, though I was excited about the novel for very different reasons at the end than I had started with. Dumitrescu’s work is an autobiographical novel, tracing her journey as a child in Romania to her migration to Canada. For lovers of plot-driven work, this book will not be for you. It is beautifully written, lyrical and fanciful, focusing on the world of children and youth, wandering through the significant memories of Dumitrescu’s life. It is not written as a continuous story, rather as a set of linked stories about the same person.

One of the most beautiful things about this novel was the blurring between poetry and prose. It straddles the line between these forms of writing often: the repetition of “My village had everything” in the chapter titled Panopticon, for example, was lovely. The poetic way of sharing her story lays bare the innocence and joy of childhood, against a backdrop which is both familiar to us as Western readers and also very foreign. The titular “cemetery for bees” is detailed in a chapter of the same name, telling of her summer activity of finding dead bees and burying them in the same part of their yard – these beehives which keep the Securitate from taking too close a look at their family’s house, keeping the intrusiveness of the state slightly at bay.

These combating images: a childhood world where insects are buried, old wedding dresses are worn, school is a struggle and a triumph – sitting next to strict rules about what can be said, using secret radios to find out about Chernobyl, and having to apologize for attending church. Dumitrescu’s book looks back on this childhood as an adult in Montreal, in a very different world than the one she grew up in, with children of her own who have a different life and even a different language than she had. Her slices of life ask us questions about where we come from, and how we end up in these unrecognizable places.

I admit I’m a big fan of these kinds of novels, the ones where plot isn’t a focus as much as the feelings and questions the author wants to tackle, and I loved A Cemetery for Bees. Dumitrescu’s spare, lyrical writing brings you inside parts of her life and how where she came from continues to inform her present. I highly recommend this book, for the descriptions of being a child and the possibilities the world held then, and the exploration of self Dumitrescu engages in.
April 2021, The Miramichi Reader