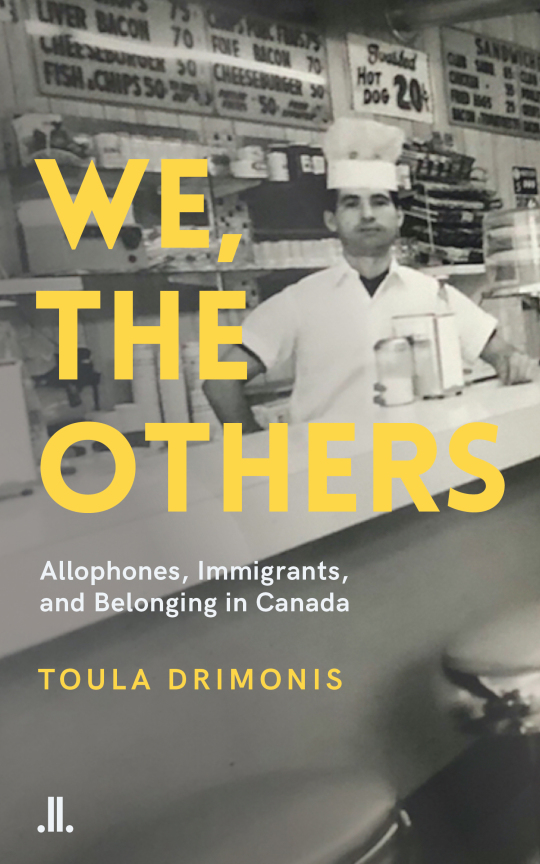 Ungrateful, opportunistic, moochers, dangerous, incompatible with our values and our way of life…
Every immigrant demographic has heard these descriptors at some point in their migration history. We, the Others  takes a contemporary look at the xenophobia, ethno-nationalism, and fear of the other that leads to discrimination and the belief that immigration is a polluting force.

Rooted in the author’s personal family history as the second-generation daughter of Greek immigrants, and from her research as a journalist and columnist covering politics, policy and social issues in Quebec and Canada, Drimonis courageously tackles this country’s history and practices, divisive legislation like Bill 21, and various nationalist movements that have influenced policy. We, the Others is a poignant look at inter-generational struggles, conflicting loyalties, and the heartfelt questions of belonging.

Toula Drimonis is a Montreal-based opinion columnist, writer and news producer. A former news director for TC Media, she has reported and written on politics, social justice, and women's issues for national and international publications. She has worked in television, radio, and print in all three of her languages, and has appeared on TV as both panelist and contributor to English and French-language current-affairs and cultural news shows.

We, the Others: Allophones, Immigrants and Belonging in Canada chronicles Drimonis’s own family history and delves into the discrimination faced by Italians, Jews, Cambodians, Vietnamese, Sudanese and Syrians in the province, as well as analyzing anti-Black and anti-Asian hate crimes. Since its release in September 2022, the book has become a sensation; now in its eighth printing, it will be translated into a French edition to be published by Éditions Somme Toute in 2023. Drimonis’s writing is informed but conversational and inviting. Her book is a plea for understanding the immigrant experience in Quebec:
“I’m a Quebecer, I’m Greek, I’m Canadian,” she writes. “I’m all of those things … They’re all mine. I’m not giving anything back.”
Read more.
5 January 2023, Quill & Quire

In her debut book, We, the Others: Allophones, Immigrants, and Belonging in Canada, Montreal author Toula Drimonis writes lovingly about her parents leaving Greece for Quebec with only 50 dollars in their pockets to invest in an unknown future. From there, the book expands to tell the dense histories and realities of immigrants across Canada. She also writes about folks like her: those second-gen Canadians--or in our cases, Quebecers--forever figuring out how to belong.
Listen here.
17 December 2022, CBC The Bridge

CultMTL: Striking a chord in Quebec

It is the hallmark of an excellent writer that a reader with no obvious connection to the source material or subject at hand be made to feel not only welcomed by the text, but almost immediately absorbed by perspectives and life experiences wholly different from my own. Such was my experience reading Toula Drimonis’s We, the Others.

... I cannot recommend this book enough. If you don’t think there’s anything in it for you, you’re most likely in for a surprise. Buy it for that backwards uncle that makes family dinners awkward — he likely needs it most of all.
Read more.
5 December 2022, CultMTL

Toula was a guest on the morning show with Marjorie Champagne, Québec Reveille.
Jump to 16:45 to listen to the discussion here.
17 November 2022, CKIA FM Québec Réveille

CBC Radio Noon: "Is Quebec a welcoming place for immigrants?"

Toula sat in for the hour-long radio call in show, Daybreak, on CBC.
Listen to the whole show here.
15 November 2022, CBC Radio Noon.

Montreal Review of Books: "On belonging"

Drimonis discusses what she sees as the roots of xenophobia, “Through the prism of Quebec history and nationalism, many Quebecers have somehow managed to divorce French settlement from colonial violence, conquest, and dispossession. Quebec nationalists do not see themselves as being a position of power within the Canadian federation and therefore are never guilty of holding the upper hand in any possible system of discrimination.”

Not only do Quebec nationalists not see themselves as having the upper hand, but Drimonis suggests that they also feel a sense of cultural insecurity. Discussing her book, she tells me, “I do understand linguistic and cultural insecurity. There are legitimate reasons for a lot of that. But a lot of it is so exaggerated and taken out of context. If you get people riled up, if you get people feeling disrespected; these are really easy buttons to push.”
Read more.
1 November 2022, Montreal Review of Books

Part memoir, part history, part manifesto, the book unpacks the complexity of immigrant and second-generation identities, and explores how the political discourse around immigration gets so much wrong.

There is so much I appreciated about this book: Drimonis’s questioning why those migrating for economic reasons (as her parents did) are somehow seen as less worthy; the notion that immigrants and refugees should be perpetually grateful for their life in Canada; what we lose when we reduce newcomers to their economic contributions; and the nuanced and multi-layered discussion of immigrant identity.
Read more.
October 2022, Philip Moscovitch, Halifax Examiner

CKCU: Can I Have a Word?

Toula Drimonis isn't really her name: it's "Archantoula." But Toula _is_ her name, because that name follows Drimonis through her life as a writer, broadcaster and commentator. Her new book "We, The Others" is a combination of personal reflections on her life as the child of Greek immigrants and observations on political and social life in her city of Montreal, the province of Quebec, and the country of Canada. It's a fascinating read.
Listen here.
13 October 2022, Bob LeDrew, Can I Have a Word, CKCU

Toula Drimonis spoke to CTV News Montreal about We, the Others.
“In my day to day interactions, the overwhelming majority of Quebecers are open and welcoming. But the current political tone is dangerous.”
Watch here.
30 September 2022, CTV News Montreal

What does it mean to belong?

Toula Drimonis guested on CJAD's Montreal Now to talk about immigration, xenophobia, and the looming provincial election.
"Unfortunately, anti-immigration attitudes are as old as time. But it's nonsense because wave after wave, each demographic proves that they can integrate and they do contribute."
Listen here.
29 September 2022, CJAD Montreal Now

"An insider's look at the immigrant experience"

The timing couldn’t be better. With the Quebec election campaign in the homestretch, with Coalition Avenir Québec Leader François Legault linking immigrants to extremism and violence (he has since backtracked), Toula Drimonis offers a view from the other side.

... While she’s aware she might ruffle some feathers, Drimonis sincerely hopes her book might also help francophone Quebecers see things in a different light. Far from Quebec-bashing, We, the Others, she argues, comes from a place of love.
Read more.
29 September 2022, Montreal Gazette

"Integration and assimilation are not the same thing"

Toula Drimonis is a guest on CBC's The Current with Matt Galloway. Matt asks "Who is included in the We, and what the heck is an allophone?" An important discussion on the eve of a provincial election.
Jump to the 32-minute mark to hear the segment.
Listen here.
29 September 2022, The Current

A fantastic interview with Toula Drimonis in French with Catherine Genest of Nouveau Projet.

"An incredibly timely and important book"

Toula guests on CBC Radio Noon to talk about immigration, the upcoming Quebec election, and questions of assimilation and othering. "When I hear this anti-immigrant talk, you are talking about my parents. The ordinary, not extraordinary immigrants who came here and contributed in so many ways...To treat these people as punching bags to score political points is beneath what I want my politicians and my premier to be doing right now."
Listen here.
16 September 2022, CBC Radio Noon

This book hit me hard. We, the Others is one heck of an interesting read. Non-fiction, with footnotes galore, it is part memoir as well as being full-on jam packed with information. With every one of its three parts highly readable, this is definitely a page-turner that I relished, as both a political scientist and a human being.
Read more
11 September 2022, The Miramichi Reader

Toula sits down with Pénélope McQuaid, host of the Radio-Canada mid-morning show Pénélope. A wide-ranging rollicking and even moving conversation. In French.
Listen here.
9 September 2022, Pénélope

"When I completed this book and laid it down, the first word that came to me was insightful. As an Indigenous person who has been often caught in the Anglo-Québécois divide, having profound relationships on both sides, Drimonis’ contribution is both significant and a gift."
—The Honourable Romeo Saganash
Former federal MP, Canadian Cree lawyer, and Quebec's first Indigenous Member of Parliament.

"Imagine my astonishment when I discovered that Toula, a Greek first-generation immigrant to Quebec and Canada, GETS me, a Black Canadian Québécoise woman of diverse ethnic origins! Her descriptions of the overlapping layers of identities that sit alongside our love for the French language, culture and democratic social norms struck a chord in my heart and soul. Toula understands how immigrants both knowingly and unknowingly absorb the heart of Quebec culture while simultaneously recognizing a Canadian identity, which is then again stacked upon other identities. This book is a MUST READ for all. It will enrich one’s understanding of the immigrant experience and that of integration through the multiple stages. Thank you, Toula."
—The Honourable Marlene Jennings
Former federal MP, first Black woman from Quebec to be elected to Parliament, former Chair of QCGN.

"We, the Others is a beautiful love paean to Toula Drimonis's Greek immigrant parents, and to all immigrant parents like hers. Drimonis evokes a respect for ordinary people who work hard every day, build a life for their families, and who are like every Canadian or Quebecer—save for the upheaval, fear, and precariousness of escaping conflict or poverty and starting anew.We, the Others makes a strong case in favour of immigration and tells us how newcomers make us richer in every way. Thanks to immigrants, we discover new ideas, languages, foods, and cultures without going much further than the local dépanneur. As Drimonis notes, every new wave changes us imperceptibly until, over time, the others are now simply us, and we are all the better for it."
—Michael Fukushima
Canadian filmmaker, former head NFB Animation Studio, director of Minoru: Memory of Exile, an animated documentary about the Japanese Canadian internment.

"We, the Others is a riveting story that reveals a deep understanding of Canadian history, cultural norms, struggles of immigrant communities, and how communities are woven together by a shared yearning to survive and thrive. Toula does not shy away from shedding light on our country’s racist past and present, and does so with bravery and an unapologetic sense of pride. Her words are real, raw and lay bare truths that many of us have lived."
—Fariha Naqvi-Mohamed
Canadian journalist and columnist. The first woman to wear the hijab on Quebec television in her role as a video journalist for CityNews Montreal.

"Toula takes us on an adventure of a lifetime. From her parents' departure from Greece to her unique journey growing up as a child of immigrants, to her extensive work as a journalist and keen observer of Quebec society. She describes the challenges of integration against the backdrop of hardships and disappointments that many immigrants face while trying to thrive in a society that continues to view them as a threat to their language, economic growth and security."
—The Honourable Eleni Bakopanos
Former federal MP, first Greek-born woman to be elected to Parliament.