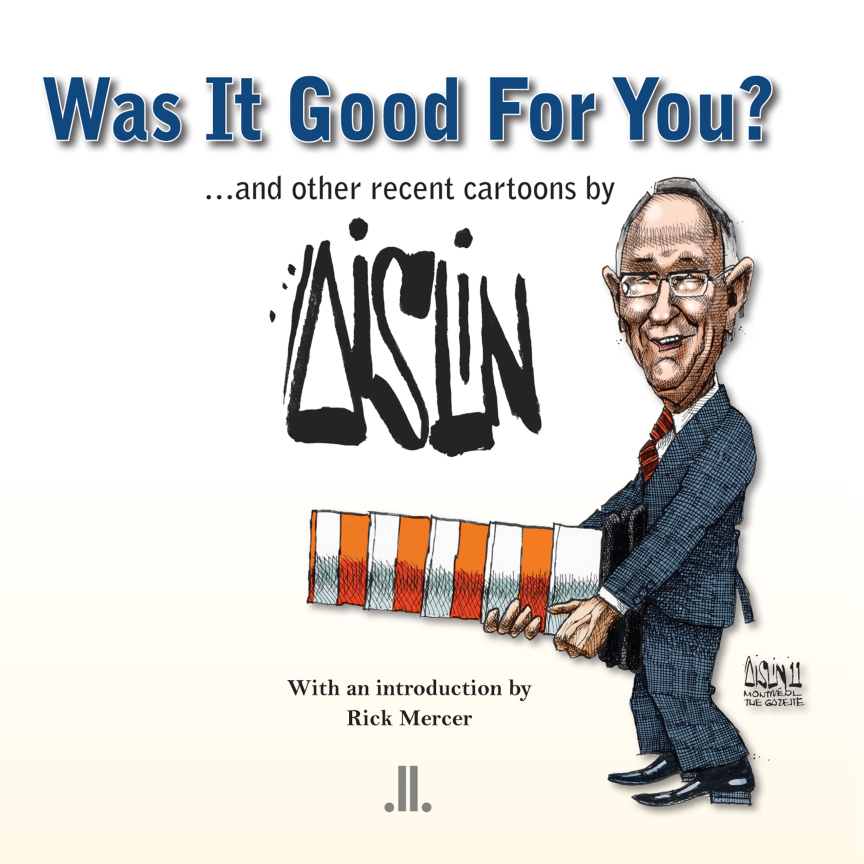 Was It Good For You?

CLICK HERE for the Mostly Mosher bundle: Was It Good For You + The Wrecking Ball for the low price of $30 (+ shipping)!

AISLIN is the nom de plume that Terry Mosher has used for over forty years as the political cartoonist for The Gazette in Montreal. He is also President emeritus of the Association of Canadian Editorial Cartoonists and, in that capacity, he has recently served as a judge and observer at International cartoon events in Portugal, Turkey, China, Australia, and Cuba. Named an Officer of the Order of Canada in May 2003, Mosher is the winner of two National Newspaper Awards, and In May 2007 he received an honorary Doctor of Letters from McGill University. In 2012 he was inducted into the Canadian Cartoonists’ Hall of Fame as part of the 8th Annual Doug Wright Awards for Canadian Cartooning. The Wrecking Ball was published by LLP in 2014.

The name Aislin is derived from a Gaelic word meaning ‘dream’, but to many of the more dubious members of Canada’s political class, Aislin is something more of a nightmare. It’s a name that has become synonymous with biting political satire and razor-sharp wit. But more importantly he is Canada’s most celebrated shit disturber.
— Rick Mercer, from the Foreword to Was It Good For You?

Stop by to meet Terry Mosher (Aislin) Thursday, January 31st, 2.45 p.m., at the Literary Press Group, booth 332, OLA. And -- great news for readers of CFN & Seaway, who have a new cartoonist! He's everywhere! Here's Terry on yahoo.com, as well.

Celebrated Canadian cartoonist Aislin (aka Terry Mosher) joins CBC’s Rick Mercer for a humorous and insightful discussion on the state of the nation, which is also chronicled in Was It Good For You? With Geoff Pevere. October 18th, 7 p.m., drinks and cash bar 6 p.m. Star Talks, Bram and Bluma Appel Salon, Toronto Reference Library. Admission is free, but tickets are needed; reserve yours online September 20th, 10 a.m. They'll go fast.
September 20th update: Tickets had all been booked one hour after they became available!

CBC TV's The National, CBC News, and Home Run were among the media covering the induction of the great Canadian cartoonist -- and LLP author -- Terry Mosher (Aislin)'s induction into Giants of the North Canadian Cartoonists' Hall of Fame.

Photographs of the May 5th event in The Gazette show Aislin on stage with Toronto journalist and author Rick Salutin, who has just published Keeping the Public in Public Education (LLP). A great duo!

Tweet from @MargaretAtwood: Cartoonist Terry Mosher (Aislin) inducted into Hall of Fame <http://www.lindaleith.com/pages/about> AND has a new book coming out! Love his work! Classic!