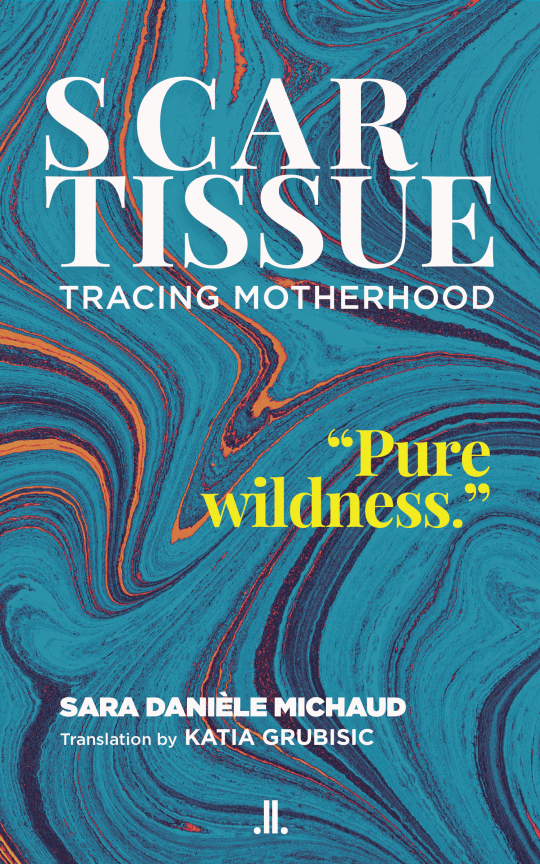 AVAILABLE FOR PRE-ORDER!
What makes a mother? More than any other relationship or identity, motherhood is both organic and constructed. Mothers are created by their children, and then simultaneously expanded and abbreviated by maternity as a social category.

In Scar Tissue: Tracing Motherhood, Montreal writer and literary philosopher Sara Danièle Michaud brings her considerable intellectual scope to the impossible intimacy of this most primal human relationship. Intense and intertextual, the book draws as easily from Saint Augustine as from Sheila Heti, weaving a long essay that is both deeply personal and eloquently universal.

SARA DANIÈLE MICHAUD holds a doctorate in comparative literature from the Université de Montréal, and conducted postdoctoral work at the University of Toronto on conversion narratives. Her research and publications have often looked at the notion of the sacred and the intersection of philosophy and literature. She currently teaches literature at the Cégep de Saint-Laurent. Cicatrices: Carnets de conversion, published by Nota Bene in 2022, is her fourth book and the first one to be translated into English.

KATIA GRUBISIC is a writer, editor, and translator. She was coordinator of the Atwater Poetry Project reading series, and was a founding member of the editorial board for the Icehouse Poetry imprint at Goose Lane Editions. Her own work has appeared in various Canadian and international publications. She has been a finalist for the Governor General's Literary Award for translation, and her collection of poems What if red ran out won the Gerald Lampert award for best first book.

One of the strongest, most original, candid texts I have read about becoming a mother—about moving on to that new life—and which also manages to avoid idealization.
--RADIO-CANADA

By sharing this most intimate notebook with the world, Sara Danièle Michaud achieves something that is almost sacred; she makes it possible for the singular to become universal—her own experience, but also that of women writers who have come before her and who, like her, have sought to enter into conversation and into relationships, with other mothers.
--Le Devoir