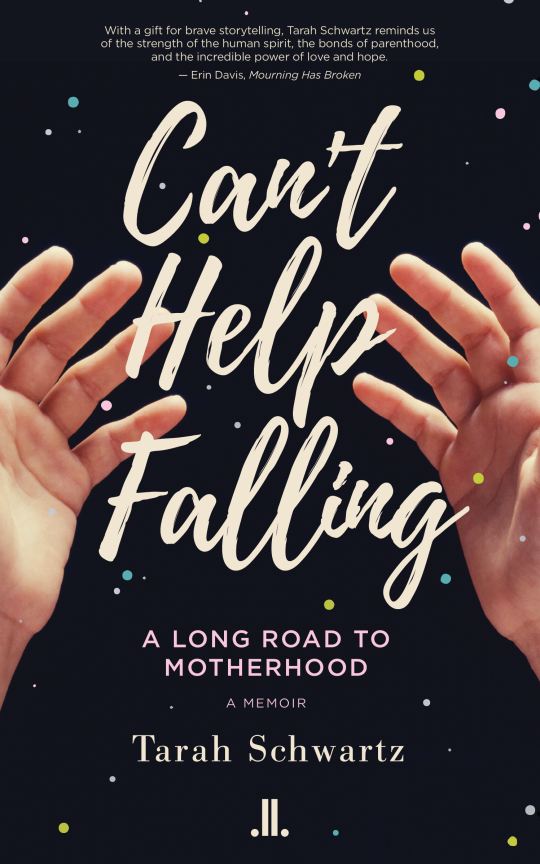 When Tarah Schwartz miscarried for the first time at almost 5 months, it was devastating. Determined to try again, more miscarriages would follow, threatening her stability and her relationships, and changing her profoundly. In this memoir, Tarah puts words to excruciating loss as she recounts her unexpected and deeply inspiring journey to motherhood.

As a long time news reporter, she spent years working in front of a television camera, telling stories that reflected the power of the human spirit to survive. This time she tells her own.

Tarah Schwartz spent more than 18 years as a reporter and news anchor for CTV Television. She has won four Canadian journalism awards and been named a woman of influence by Na’amat Canada. She is currently the Director of Communications at Montreal’s MUHC Foundation where she works to raise awareness about the value of philanthropy. Tarah was born and raised in Montreal where she lives with her husband Enrico, their son Sam and cat Milo.

Pregnantish: "Why Adopting My Son Was Worth Every Difficult Step"

Tarah Schwartz's essay in Pregnantish turned out to be their most shared article ever.
"Adoption is a labor of the soul. You take a great breath and then exhale minute by minute, day by day, year after year, until a tiny precious being is placed in your hands asking to be cherished. Our son has given us more than I can ever possibly put into words. When I feel him pressed against me, there is simply nowhere else in the world I would rather be. When I tuck him in at night, and he places his palm on my cheek, I stare at him, refusing to blink because I don’t want to miss a single second."
Read it here.
October 2022, Pregnantish

"An inspiring journey to parenthood"

Tarah Schwartz visited the studios of CTV's The Social to talk about her book. A lively, candid and intimate discussion about the difficult journey to motherhood.
Watch here.
June 2022, CTV The Social

"I wrote this because I wanted to remember."
This week on MAtv's Writers Unbound, host Shelley Pomerance meets Tarah Schwartz, author of the memoir Can’t Help Falling: A Long Road to Motherhood, and David Bradford, author of the poetry collection Dream of No One but Myself. They discuss writing about loss and recovery, and the experience of publishing a first book. Also, we drop in at Drawn & Quarterly, the Mile End bookstore, for reading recommendations for children and adults.
Watch here.
May 2022, MAtv Writers Unbound

"A deep dive into both the challenges and the triumphs"

Tarah Schwartz appears on CTV Your Morning to talk about infertitility and the long road to motherhood. "Hold on to hope," she says. And: "This is an issue for everyone, not just women or mothers."
Watch here.
May 2022, CTV Your Morning

I have had the pleasure of knowing Tarah Schwartz for over two decades. She’s a remarkable individual, yet after reading her exceptional new book Can’t Help Falling: A Long Road To Motherhood, my degree of admiration for her has increased ten-fold.

How did Tarah manage to keep smiling and do her job for seven years as her road to become a mom was so challenging? After several miscarriages and in vitro fertilization treatments, she and her husband Enrico decided to adopt. But that was no easy process either. On the contrary. They did eventually adopt Sam, a beautiful child from South Korea. The pages in the book describing that experience belong in a Lifetime movie script. It all comes down to an incredibly strong marriage and a woman on a mission.

In this book, the reader feels Tarah’s pain each time she miscarries. “People told us to relax, that it would happen,” she wrote. “I am telling you right now, never say that to people trying to have a baby. It doesn’t help, not even a bit. It diminishes the struggle.”

Tarah shares stories of being sent out on assignment for CTV and how she coped with some very tragic topics involving the death of young people. She seemed to have additional empathy for the parents and was able to convey that. Adopting a child from the other side of the world took years. For a variety of reasons she had to spend three months in South Korea, playing a game of cat and mouse with Canadian immigration and South Korea government officials until a visa for Sam was issued. Imagine just as she had everything in place, Canadian foreign embassy workers went on strike. I must admit that when I read the epilogue and saw so happy Tarah, Enrico, Sam (and cat Milo) are years later, I got a bit teary eyed.

When I invited her to speak to students at her former elementary school in TMR, Carlyle, she had a few important messages. “You never know what somebody is going through,” she said. “Always be kind.”
April 2022, The Suburban

"Opening the door to conversation"

"Lessening the shame and stigma"

Lianne Castelino shares some intimate moments with Tarah Schwartz as they talk about her "extremely moving" memoir Can't Help Falling. Take a listen to the interview on Where Parents Talk.
Watch it here.
April 18, 2022, Where Parents Talk

Sabrina Marandola of CBC Montreal's Let's Go spent some quality time with Tarah Schwartz talking about Can't Help Falling. A lovely interview not to be missed.
Listen to it here.
April 7, 2022, CBC Montreal

"This book is for everyone"

Andrew Carter of Montreal's CJAD sits down with Tarah Schwartz to talk about her "many years of infertility" outlined in her memoir, Can't Help Falling.
Jump to 26:00 to catch it here.
March 2022, CJAD

Tarah sits down with Global Morning host Laura Casella to talk about her memoir and her difficult path to motherhood.
Catch it here.
March 2022, Global News Morning

It was a little more than three years ago when Tarah Schwartz announced she would be leaving her plum gig as a weekend news anchor and reporter at CTV Montreal — without having another job in place. She said she simply wanted to spend weekend time with her husband, Enrico Caouette, and their son, Sam.

Regardless, many were left puzzled by her decision, considering she had spent 18 years working her way up at CTV, won a host of awards for her reporting and was certainly on the fast track at the network. But what very few knew was the rationale behind her choice, even though Schwartz had written a poignant yet abbreviated piece for the Montreal Gazette in 2014 that offered some insights.

Schwartz reveals her reasoning and much more in her newly released memoir, Can’t Help Falling: A Long Road to Motherhood. Her decision to leave CTV had almost everything to do with the great lengths she and Caouette had gone to in trying to have a baby and, later, in trying to adopt one.

In heart-wrenching, painstaking detail, Schwartz chronicles her ordeals with miscarriages, fertility treatments and adoption, which she grappled with all while maintaining professionalism on the job and not giving viewers any indication of the anguish she had been going through.
Read more.
18 March 2022, Montreal Gazette

"All of the joy and all of the grief"

Before I had children, I was unaware of the “mamasphere,” a mass of scrappy blogs (and now, polished Instagram accounts) dedicated to motherhood and parenting. In one online group of self-proclaimed parent over-sharers I currently follow, contributors talk openly about almost everything to do with raising kids – sibling room sharing, struggles with bedwetting, and picky eating. Some even share photos of the rashes their children develop, polling whether to call the doctor or not. Yet when the topics of infertility or miscarriage are raised, there is always a content warning that precedes the post. These are traumatic experiences. Even when fertility treatments are successful, the process has its revulsions.

In her memoir, Can’t Help Falling: A Long Road to Motherhood, former broadcast journalist and news anchor Tarah Schwartz opens with a hopeful message in lieu of a warning. “I’m sharing my story about the moments that led me from being lost to finding the kind of love I knew I wanted. I don’t want to imply there are always happy endings, but they do exist.” ...

A memoir that borrows from the inspirational genre, Can’t Help Falling opens a door on the shrouded experiences of couples who suffer miscarriages and infertility, and who navigate the uncertainties of adoption. An intimate and companionable read, it may help others find comfort on their long roads to parenthood.
Read more.
March 2022, Montreal Review of Books

"A deeply moving story of grief, incredible obstacles, the power of hope, and hard-won wisdom and joy. I couldn't stop reading."
––Avery Swartz, author See You On the Internet

"With a gift for brave storytelling, Tarah Schwartz reminds us of the strength of the human spirit, the bonds of parenthood, and the incredible power of love and hope."
––Erin Davis, author Mourning Has Broken

"For anyone who's ever struggled to become a parent or grappled with grief, Tarah Schwartz reassures you that you're not alone. Rarely do stories like this get told and even more rarely with such candour. Can't Help Falling will stay with you for a long time."
––Natasha Hall, host CJAD

"Tarah's journey to motherhood is incredibly compelling, heartbreaking and hopeful all at the same time. As someone who struggled with infertility for years, it was a comfort. This book is a fantastic resource for anyone going through infertility or adoption."
––Robyn Flynn, host TSN 690

Written with elegant prose and vulnerability, we follow Tarah through the complicated, lengthy, and grief-stricken path toward adoption where Tarah finally lands in South Korea to meet her son for the first time. Adoption begins with loss, and she reminds us of that when her young son, without words, expresses torrential grief that breaks both of their hearts, and bonds them tightly together.

For those who have experienced the type of loss Tarah Schwartz writes about, her words will feel like an echo, a reverberation of understanding and compassion. It is a reminder that letting go of control in life is an act of faith, and that happy endings do exist even if they take shape of things we may have never considered. Wondrously hopeful and beautifully written, Can’t Help Falling  is a warm addition to the books that aim to remind mothers that we are not alone in our grief, our hope, and our longing for the child we already love in our hearts.
Read more.
February 2022, The Miramichi Reader