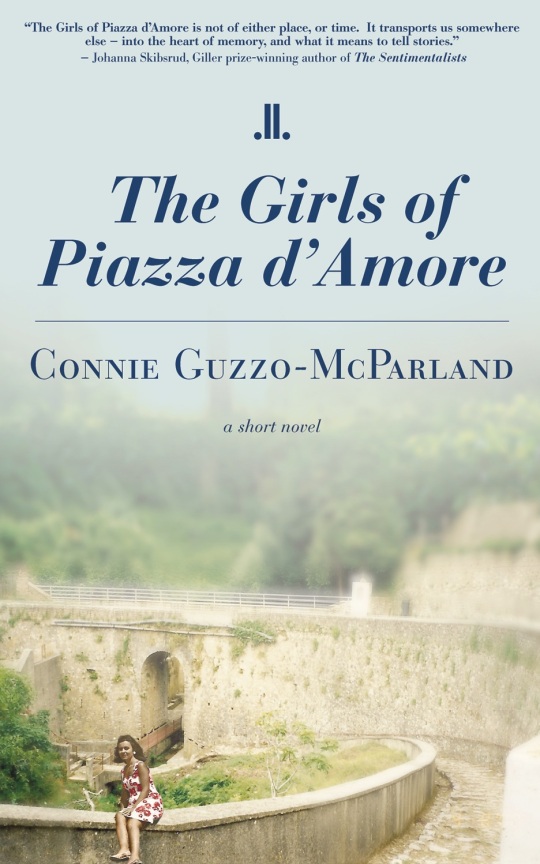 The Girls of Piazza d'Amore

A quintessential Calabrian love story. The Girls of Piazza d’Amore traces the lives of three village girls and the forces that lead them to leave home for a new life across the ocean. Set in southern Italy in the 1950s, Connie Guzzo-McParland’s short novel walks us through the piazza and the narrow alleys of her own childhood, imaginatively recreating an entire world as seen through the eyes of a young girl who accompanies her friends on their evening passeggiate to the spring water fountain and carries their love notes to the boys they love. The joys of Calabrian village life are palpable, and so are its frustrations and heartbreaks, but this is a world on the cusp of irrevocable change, as family after family is leaving. And that’s what is most heartbreaking of all.

Born in Italy, raised in Montreal, Connie Guzzo-McParland has enjoyed an eclectic mix of life experiences. She majored in Italian literature at Concordia University, then pursued a teaching and business career before graduating from the Creative Writing Master’s program at Concordia University where she received the 2006-2007 David McKeen Award for Creative Writing for her thesis, the novel Girotondo. An excerpt from this novel, translated into Italian, won second prize at the Premio Letterario Cosseria in Italy. Since 2010 she has been co-director and President of Guernica Editions.

Connie Guzzo-McParland's is "a poignant portrait of a simple world fated to change and the idyllic times of childhood that, however remote, none of us can quite manage to leave behind."
--Sarah Fletcher in the Montreal Review of Books.

"In 1955, the village of Mulirena is on the verge of radical transformation, as more and more families leave Italy to seek new opportunities in North America. Nine-year-old Caterina witnesses the last days of the old way of life before her family immigrates to Montreal. Fiction blurs with memoir in Guzzo-McParland’s debut novel, as the older Caterina, like the author herself, seeks to write a Calabrian love story inspired by memories, finding that she cannot separate the lives of the older girls she admires from the story of the village and its people.... Guzzo-McParland’s characters such as Professore Nucci and U Gruncu (“the crab”) are vivid, and her descriptions of place, customs, clothing, and food are evocative and memorable. The stunning tale of a “marriage by proxy”—in which the bride plans “the best wedding that Mulirena had ever seen,” even though the groom she has not yet met is in Montreal and his brother stands in for him at the ceremony—highlights the tension between the customs of the old world and the unknown future that awaits immigrants in their new home."
--Publisher's Weekly

"The 'immigration story' is an important and inescapable theme in contemporary literature, certainly in Canada. The Girls of Piazza d’Amore is a welcome addition precisely because it gives us a nuanced understanding of “back home,” why people left and how they got here. What’s more, rural stories have been recounted less than urban ones. Weaving together the personal, communal and global, this makes for much more interesting reading than a sociological tract. The language used is simple, almost spare, a device to tell the story rather than embellish it. Yet, this is also a complex work where the first-person narrator, now an adult living in Montreal, looks back analytically at her hitherto, taken-for-granted childhood."
--Veena Gokhale, Rover Arts.

“Through vivid use of language and imagery Connie McParland moves her readers easily between 1950s Italy and present day Montreal. Ultimately, however, The Girls of Piazza d’Amore is not of either place, or time.  It transports us somewhere else -- into the heart of memory, and what it means to tell stories.”
-- Johanna Skibsrud, Giller prize-winning author of The Sentimentalists

“The Girls of Piazza d’Amore offers a richly textured story of immigration and childhood, expansively set, generously inviting, and full of warmth. With this debut novel, Connie McParland weaves a vivid story that attempts to find meaning in the distance between the decorum of present-day Montreal and the restless soul of a Calabrian childhood.  In doing so, she joins a rich lineage of modern Italian-Canadian writing - from Nino Ricci's Lives of the Saints to Vittorio Rossi's A Carpenter's Trilogy - in documenting the complex web of families, traditions, loves and losses spanning across decades and the Atlantic.”
-- Dimitri Nasrallah, QWF award-winning author of Niko.