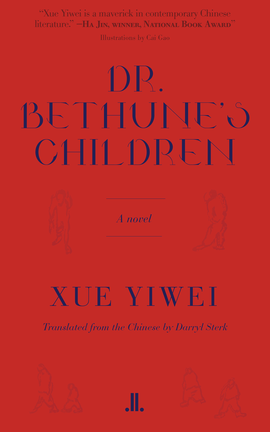 Xue Yiwei is an award-winning Chinese-Canadian writer born in Chenzhou and raised in the Hunan province. He has a BSc in Computer Science from Beijing University of Aeronautics and Astronautics, an MA in English Literature from Université de Montréal, and a PhD in Linguistics from Guangdong University of Foreign Studies. He is the author of sixteen books in Chinese, including four novels—Desertion (1989, reissued 2012), Dr. Bethune’s Children (2011), Farewells from a Shadow (2013), and Empty Nest (2014)—and five collections of stories. His first book in translation, Shenzheners (trans. Darryl Sterk) was published by LLP in 2016. The 2017 winner of the Montreal Diversity Literary Award presented by the Montreal Arts Council and Blue Metropolis Foundation, he lives in Montreal.

Darryl Sterk is a Mandarin Chinese-English literary translator. In addition to Shenzheners, Dr. Bethune's Children, and Home Sickness for LLP, he has translated Wu Ming-yi's The Man With the Compound Eyes (Harvill Secker) and The Stolen Bicycle (Text), as well as Horace Ho's The Tree Fort on Carnation Lane (Balestier) and short stories for The Taipei Chinese Pen and Pathlight. He lives in Hong Kong.

"Mr. Xue, and even President Xi are all Dr. Bethune’s children, and by inference also Mao’s children. Nobel Prize for Literature has been very much a political game. I think only about 10% of the winners in last 60 years since WW2 are worthy the prize, certainly not the Chinese winners. After reading only one book by Xue Yiwei, I think he may truly deserve one."
N. M. Cheung, posting on Hidden Harmonies, 21 November 2017.

Yet another accolade for Dr. Bethune's Children

One of the most acclaimed and widely read of Chinese writers has, it turns out, been hiding in plain sight in Montreal for almost 15 years, his work untranslated worldwide even while his reputation in his homeland continues to grow. Wide-ranging and prolific — he has even recently been rewriting a considerable portion of his already-published ouevre — Yiwei, 52, finally gets his introduction to English readers with the appearance of Shenzheners. The loosely interconnected set of nine stories follows the private and public lives of people from every social level of China’s newest metropolis. The title’s echo of another set of city stories, Joyce’s Dubliners, is earned: via Darryl Sterk’s smooth translation we get a look into Shenzhen’s soul through deceptively low-key tales of small-scale epiphanies.
Read more.

"Decrying the senselessness of violence"

Every day, novelist Xue Yiwei walks in the park commemorating the 14 women who died in the École Polytechnique massacre on Dec. 6, 1989.

Xue first noticed the pathway dotted by steel blocks inscribed with the women’s initials shortly after he moved to Montreal from China in 2002. When he learned the story behind the site at Queen Mary Rd. and Decelles Ave., he was struck by its parallels with an event seared into the memory of his homeland: the Tiananmen Square massacre.

The Polytechnique tragedy happened six months after Chinese troops mowed down hundreds of pro-democracy demonstrators in Beijing in June 1989 — a year also marked by the fall of the Berlin Wall and toppling of Communist regimes in Eastern Europe.

Like many of the young protesters killed in Tiananmen Square, the women gunned down by a misogynistic loner at the Polytechnique had their whole adult lives ahead of them. In both cases, the deaths threw a nation into mourning, opening wounds that could never heal.

Xue’s discovery that the Montreal massacre had occurred the same year as the carnage in Tiananmen Square is at the heart of his novel Dr. Bethune’s Children, recently published for the first time in English by Montreal’s Linda Leith Publishing.
Read more.

Dr. Bethune's Children is on The Globe and Mail's 100 Best Books of 2017 where, in this golden age of literary translation in Canada, this extraordinary novel is the only Canadian fiction in translation on the list. And it's a translation from Chinese, which is why it isn't even eligible for most of Canada's literary prizes. Congratulations to author Xue Yiwei and to translator Darryl Sterk!
November 25, 2017

Xue Yiwei is on the cover of the 20th anniversay issue of Montreal Review of Books with a great story about his first novel in English, Dr. Bethune's Children, by Anita Anand. The issue launches Monday, Nov 7, 7 p.m. at La Petite Librairie Drawn & Quarterly, 176 Bernard Ouest.
November 3, 2017

"As I reported on @cbcHomerun Dr. Bethune's Children by Xue Yiwei is a wonderful novel bringing together great Chinese characters & and a narrator living in Montreal LL publishing."
RICHARD KING, CBC RADIO, NOVEMBER 2017

"Norman Bethune (1890-1939) left a lopsided legacy. Canadians know of him; in China, Mao immortalized the Canadian physician in words memorized and internalized by millions of schoolchildren. While Shenzheners, Xue Yiwei's first book translated into English, included Canadian settings and characters, it was ultimately about the city to the north of Hong Kong. Dr. Bethune's Children, by contrast, though a Chinese novel – about Bethune's spiritual children, those who came of age during China's Cultural Revolution – is also undeniably Canadian. Xue, who lives in Montreal, writes that this is "a book for China and Canada to read – and read together." Written as a series of digressive letters from the narrator – also living in Montreal – to the doctor's spirit, Dr. Bethune's Children is a novel of ironic wit and deep feeling, marked by a frank sexuality. Too honest, especially on the Tiananmen Square Massacre, Dr. Bethune's Children is banned in mainland China. For now, it is up to Canadians to read this shared legacy – until we can read together."
JADE COLBERT, The Globe and Mail.
July, 2017: Xue Yiwei is featured on an AELAQ Inside the Frozen Mammoth podcast with poet Kelly Norah Druker.
July 10, 2017: Time Out Beijing interview with LLP author Xue Yiwei, in advance of his Beijing Bookworm appearance Weds July 12, 2017.