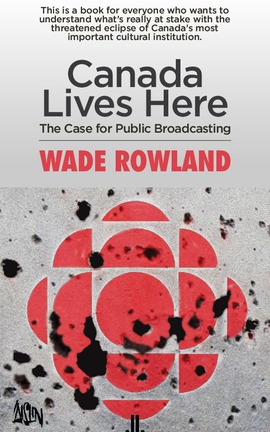 Canada Lives Here tells the tumultuous story of public broadcasting in Canada, from its inception in 1933 to the CBC’s current, controversial attempts to adapt to collapsing revenues and new technologies. It explores in detail the struggle to preserve public space and foster community in an environment devoted to profit-making, arguing that the ideals of public service broadcasting are more relevant now than ever. Rowland, author of the influential Saving the CBC: Balancing Profit and Public Service (2013), identifies the issues crucial to the CBC’s survival and proposes carefully considered policy options. This is a book for everyone who wants to understand what’s really at stake with the threatened eclipse of the nation’s most important cultural institution.

Ranked among Canada's leading literary journalists, Wade Rowland is the author of more than a dozen non-fiction books including Ockham’s Razor, Greed, Inc., and Saving the CBC. As a journalist he has spent many years in television news production at the network level and has held senior management roles at both CTV and CBC, where he was also senior producer of the consumer affairs program Marketplace. Rowland was Maclean Hunter Chair of Ethics in Media at Ryerson University from 2001-2003. He earned an MA in the philosophy of science from Trent University in 2003. He holds a Ph.D. in Communication and Culture and is currently an Associate Professor in York University’s Department of Communication Studies. Born in Montreal, Wade Rowland grew up in Regina and Winnipeg and currently lives in rural Port Hope, Ontario, with his wife Christine Collie Rowland.Author website

This is an urgent, important and timely book about how public broadcasting in Canada is being eviscerated. The CBC has been abandoned, both by a government that should support it but won’t, and by a management culture, unable to handle the political, economic and technological headwinds affecting all media but especially public broadcasting. The CBC was once Canada’s greatest cultural gift to the world, now in a perilous state of programming and financial decrepitude. But it’s not yet lost. Wade Rowland gives us reasons for optimism, showing us how the CBC might yet be saved – if it can demonstrate that it can engage Canadians as citizens first, not just as deliverables to commercial and political interests.

--Jeffrey Dvorkin. Lecturer and Director of the Journalism Program, University of Toronto (Scarborough).

FARLEY MOWAT ON SAVING THE CBC: "This book should be read by everyone who gives a damn about Canada and the publicly owned broadcaster that unites us in telling our own stories on radio and television. Wade Rowland convincingly documents the slow, politically directed erosion of the CBC and he has the expertise to show us how to save, and expand, this vital component in Canadian life. Will we listen to him? I hope to God we have enough sense to do so."

August 19, 2015: Wade Rowland's Canada Lives Here: The Case for Public Broadcasting is the No. 1 new release in Radio and Wireless on amazon.ca!

Most Canadians spend more time watching television, listening to the radio, and using the internet than they do at their paid jobs, and in fact more time than they devote to any activity other than sleeping—about 62 hours a week on average. That fact alone makes it obvious that the nature and quality of what we’re seeing and hearing makes a difference in our lives, shaping who we are, as individuals and as a society.

Today, the independent television or radio station is a thing of the past: virtually all broadcast media are owned by a handful of huge corporate entities that are also involved in cable, satellite, telephone and internet services. The top five of these vertically-integrated giants… control nearly 90% of the market. … The sad fact of corporate media life is that managers have no motivation to improve public service, or the quality of programming, or Canadian content, beyond the minimum that regulation requires and audiences will tolerate, because that would mean wasting money that rightfully belongs to shareholders. It’s a well-known axiom that where public-interest regulation and corporations are concerned, minimums become maximums.

And so public broadcasters like the CBC/Radio-Canada, islands of public service commitment in the vast sea of commercial, for-profit media, survive for the simple reason that they’re needed. They are, at their best, preserves of genuine debate and reliable information, as opposed to bombast, sensation, and propaganda; sanctuaries free of vested interests, state or commercial. They provide entertainment that is nourishing, rather than merely amusing. They serve us as citizens, rather than as consumers.

The technology of broadcasting sound and images via radio waves is a blend of scientific and entrepreneurial genius, one of the modern industrial era’s truly revolutionary inventions. The concept of public broadcasting, a creation of politicians and bureaucrats, is arguably an innovation of equal significance. The decision to forge a new and potentially lucrative communication technology into a free and universal public service was both inspired and courageous. It was a product of men and women whose values had roots in the refined sensibilities of the Belle Époque in Europe, and the civic duty ethic of Victorian England; the recent catastrophe of World War 1 had taught them how fragile civilization can be.

The CBC has throughout its history been subject to more or less continuous attack from private broadcasting interests and their lobbyists in Ottawa, who have objected to competition from a publicly-funded institution. Adding their voices to the chorus more recently have been neo-liberal ideologues, who see state-subsidized enterprises of any kind as market-distorting abominations. A succession of federal governments have for eighty years and more made mollifying compromises that have left the public broadcaster in an ambiguous, confused, and ultimately untenable position, scrambling to maintain mandated services with grossly inadequate resources. In its efforts to stay afloat, the CBC has at times seemed wildly schizophrenic, a symptom of the contradiction inherent in its heavy reliance on television advertising to supplement dwindling parliamentary appropriations.