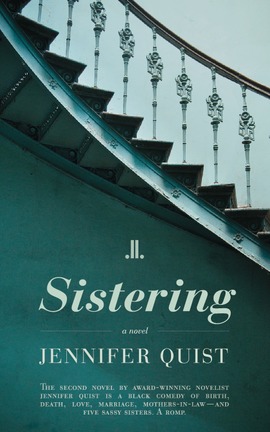 The second novel by award-winning novelist Jennifer Quist is a black comedy of birth, death, love, marriage, mothers-in-law—and five sassy sisters. When Suzanne’s role as the perfect daughter-in-law ends in a deadly accident, she panics, makes a monumentally bad decision, and upends her world. The bond with her sisters is the strongest force Suzanne knows, and it may be the one that can keep her from ruin. Quist’s new novel is hilarious, spine-chilling, satisfying, and original. A romp.

Jennifer Quist is a novelist, journalist, talker, and firstborn of five sisters. Her debut novel, Love Letters of the Angels of Death (LLP 2013), won her an Alberta Lieutenant Governor’s Emerging Artist Award in 2014. The book was longlisted for the 2015 International IMPAC Dublin Literary Award and was a finalist for a 2013 Whitney Award for Best Novel. She lives in the Edmonton area with her husband and five sons.

September 5, 2015: More great press for Sistering author Jennifer Quist, this time a feature in the St. Albert Gazette by Scott Hayes, who writes, "I don't have any sisters, but thanks to Jennifer Quists's new novel, I feel like I've just taken a crash course through the lives, the dramas, the personalities, and the many, many conversations of five sisters."

August 19, 2015: Sistering author Jennifer Quist knows something about writing good novels--and something about families, too, what with all those sisters and her own five sons. Here's her piece on the Family Saga on The 49th Shelf.

August 12, 2015: Pickle Me This reviews Jennifer Quist's Sistering: "Weird and original, a dark comedy indeed—not necessarily miles away from Sela Ward and Sisters either. This is one that will appeal in particular to readers who loved Trevor Cole’s Practical Jean, and to anyone who ever had a pack of sisters."

August 7, 2015: ... more on The 49th Shelf -- a whole feature on Sisters in CanLit, very much including Jennifer Quist's Sistering.

August 5, 2015: The September Quill & Quire has just arrived with Angie Abdou's terrific review of Sistering, by Jennifer Quist, which she compares to a Canadian version of Armistead Maupin's Tales of the City, focusing on straight people in Edmonton. "Quist has created a rollicking page-turner, a tall tale full of black humour and extreme human drama that will make for excellent escapist reading."

“My sisters’ mothers-in-law weren’t dead—not really, not fully—until someone else discovered them, wrote it down, took them away, planted a stone over them. Maybe there’s no meaning in dying when no one’s looking. If a tree falls in the forest—we all know how that goes.
The toast pops in my face, black, smoky, and shrunken.
And I know what will happen next.”

5 March 2016: Congratulations Jennifer Quist. A 2015 IMPAC Dublin Literary Award nomination and a Lieutenant-Governor of Alberta Emerging Artist Award for her first novel, Love Letters of the Angels of Death (2013), and now a Best Novel Award from the Association for Mormon Letters for Sistering (2015).