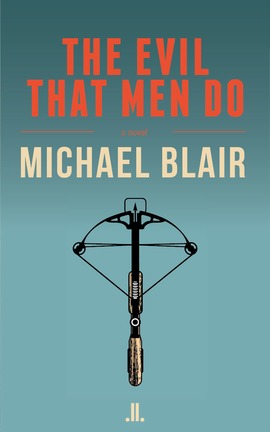 The Evil That Men Do

Riley becomes entangled in the wreckage left behind by a con man called Brandt who ran a Ponzi scheme on the West Island of Montreal. When the fifty-million-dollar scheme falls apart and dozens of people are left destitute, some of them are sure that Brandt’s wife Terry knows where he’s hiding out. Riley’s not convinced, but then Terry’s the woman Riley was living with when he left Montreal twenty years before.

Michael Blair’s first novel (If Looks Could Kill, M&S, 2001) was shortlisted for the 1999 Chapters/Robertson Davies Prize and the 2001 Quebec Writers’ Federation First Book Prize. Since then he has published five more novels, most recently True Believers (LLP, 2015). He lives in Montreal, where he works as a freelance technical writer and editor.

“Gullibility kills.” The epigram, from Carl Sagan, opens this superb novel by Montreal author Michael Blair. This is his sixth book but it’s far and away his best, with a plot so outrageous and original that I had to read it twice just to pick up things I missed. Hack Loomis is a PI in Burlington, Vt. There’s not much for a professional peeper to do in Burlington, so Hack agrees to check into the possible disappearance of his assistant’s friend, Belle Ryerson. It appears that Belle’s last known location was a meeting of UFO enthusiasts run by a psychiatrist and a very attractive woman who claims to be in touch with a space-alien mothership. No one is wearing tinfoil helmets, but they’re close. Naturally, one theory of Belle’s sudden exit is a trip to a galaxy far, far away. Hack is not deterred by ideas spun from old alien movies. He figures Belle is right on planet Earth and someone with human DNA knows where, so the search is on.

The path is funny, smart and full of great dialogue and clever characters. Gullibility kills, all right, but it also makes for a terrific plotline for a possible murder.
Margaret Cannon, The Globe and Mail, June 9, 2015

Author Michael Blair weaves a tale of duplicity that would do a professional con artist proud. The reader warms to Hack Loomis immediately. He is both everyman and the underdog, surrounded by adversaries, but never conceding defeat. If I have a reservation about Loomis, it is his personal hygiene: bathing only twice a week doesn’t endear him to readers. On the other hand, Loomis’s relationship with sidekick Connie Noble is nicely nuanced, as she is clearly taken by him but realistic about their chances of making their business relationship succeed. The other characters are well drawn, and the dialogue is spot on, tailored to each individual, whether it be the arrogant head of the law firm where Belle Ryerson worked or her trusting but naïve sister Hazel.

Deftly tapping into the commonly held belief that intelligent life must exist on other planets, Blair fashions a convincing tale of gullibility and greed, leavening his story with his trademark sly humour. The result is True Believers, an entertaining excursion into the realm of those who desperately latch on to what they want to believe.
Jim Napier, Montreal Review of Books, Spring 2015

"I’ve been a strong admirer of Michael Blair’s writing since the publication of The Dells, his first novel in the Joe Shoe series, in 2007. It’s a fine novel, and ten years on, Blair has further polished his writing: Riley is an engaging character, with a penchant for wisecracks, an ability to roll with some very tough punches, and a strong sense of decency. Add to that the other characters, each original and convincing, and an atmosphere based on Blair’s own informed knowledge of Montreal and its environs, and you have a well-paced, perfectly-plotted tale for our times, and Blair’s strongest work to date."
April 2017, Ottawa Review of Books