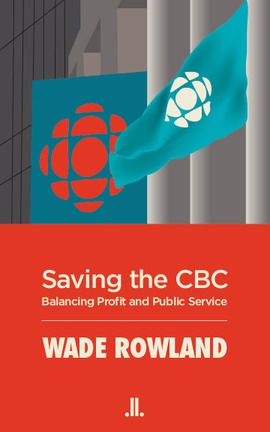 Ranked among Canada's leading literary journalists, Wade Rowland is the author of more than a dozen non-fiction books including Spirit of the Web, Galileo’s Mistake, Ockham’s Razor, and Greed, Inc. As a journalist he has spent many years in television news production at the network level and has held senior management roles at both CTV and CBC, where he was also senior producer of the consumer affairs program Marketplace. Born in Montreal, Wade Rowland grew up in Regina and Winnipeg and currently lives near Toronto.

"This book should be read by everyone who gives a damn about Canada and the publicly owned broadcaster that unites us in telling our own stories on radio and television. Wade Rowland convincingly documents the slow, politically directed erosion of the CBC and he has the expertise to show us how to save, and expand, this vital component in Canadian life. Will we listen to him? I hope to God we have enough sense to do so."
––Farley Mowat

“Consider this an impassioned polemic -- ‘debate’ is far too sedate – ignited by the CBC's degradation in recent years and fed by cold rage against the main culprits, yet with a surprising optimism about future possibilities.”
––Rick Salutin, author and Toronto Star columnist

"This is a thoughtful and timely roadmap to guide Canadians who still love public broadcasting but who despair of the present condition of the CBC. Instead of a lament, we now have a plan that can make our CBC a model for how a public broadcaster can inspire, attract and engage us all. You must read this book: Wade Rowland's vision can restore a CBC we can be proud of again."
––Jeffrey Dvorkin, Director, Journalism Program, University of Toronto

“Wade Rowland understands public service values and knows the CBC well, especially English Television. His book makes an insightful contribution to a necessary public debate about our most important cultural institution, and his recommendations are largely aligned with the priorities of the 175,000 Canadians who support our work.”
––Ian Morrison, Spokesperson, Friends of Canadian Broadcasting

"If you’re looking for the first principles required for effective public broadcasting in Canada in the twenty-first century, Wade Rowland has articulated them here with clarity and eloquence. No excuses left for failure to act – except for that most Canadian of realities: the lack of political will."
––Kealy Wilkinson, Broadcast Consultant and Executive Director, Canadian Broadcast Museum Foundation

"Is the CBC in crisis, or is Canada in crisis? This short, polemical book is a fascinating read."
––John Doyle, The Globe and Mail column

Wade Rowland's May 8th interview with CBC Radio is here.

An excerpt of Saving the CBC is on J-Source here.

And here's Claire and Farley Mowat's May 10th letter to the editor of The Globe and Mail:
Collapsing colossus?

Re Is The CBC In Crisis, Or Is Canada? (May 7): According to John Doyle, Wade Rowland’s book Saving the CBC is based on ideas and beliefs that are passing into history, and the CBC is doomed by time and circumstance to wither and die – as will Canada itself.

But are we Canadians indeed so heedless or complacent that we are willing to stand aside while our country slides into the same abyss as the fading American empire?

The CBC is one of the few remaining public bastions of our independence as a nation and as a people. If the CBC goes, we can be certain that Mr. Doyle will be proven right in forecasting the end of the Canada our ancestors created and of its replacement by a carbon copy of a collapsing colossus.
Claire and Farley Mowat, Port Hope, Ont.

Wade's May 2nd Globe & Mail op-ed piece is here, John Doyle's May 7th column here, an interview with Wade Rowland on CBC Radio here, an excerpt on J-Source here, Tweets from Margaret Atwood, a letter to the Globe from Claire and Farley Mowat here, and Marianne Ackerman's mRb piece here.

May 28,  2013: The CRTC has ruled to allow ads on CBC Radio 2, which is an issue that Wade Rowland addresses directly in his book. Wade Rowland on the 49th Shelf and on As It Happens Weds., May 29, 2013, to talk about the CRTC's decision. June 17, 2013, Wade Rowland arguing that Conservatives see the importance of the national broadcaster (The National Post).

Not to mention articles in Huffington Post, Wade's July 18th Literary Review of Canada event, and his July 26, 2013, opinion piece on Shelly Glover, the CBC and Accountability (Toronto Star).