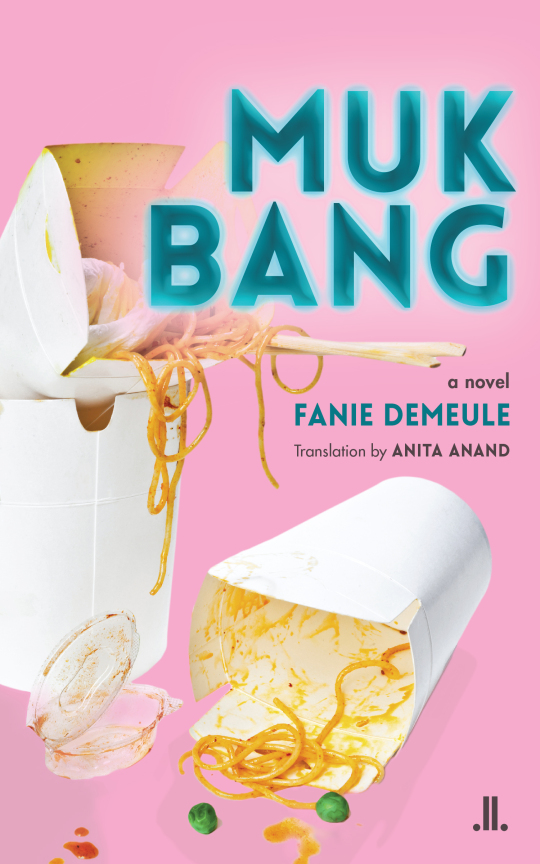 Kim Delorme is uninterested in the world beyond her computer screen, instead living on a diet of video games, early 2000s Internet videos, and fads. It’s not long before she discovers mukbangs, a voyeuristic world where people overeat in front of the camera. Intrigued, she throws herself into the ring to challenge the reigning queen, Misha Faïtas. But a horrifying incident halts her ascension, creating a shock wave that affects everyone in her life.

Mukbang is a grimy, shocking, and darkly funny dive into our relationships with food, self-image, and intimacy. True to its subject matter, Mukbang is sprinkled with QR codes throughout, each leading to an image, reference or video that enhances and adds context to the narrative.

Fanie Demeule's five books and short stories have won accolades and awards, and two of her titles are currently being adapted for film. After Lightness (Linda Leith Publishing, 2020, translated by Anita Anand), Mukbang is her second novel translated into English. She lives on the south shore of Montreal.

Anita Anand is the author of Swing in the House and other Stories, and A Convergence of Solitudes. She has translated Nirliit by Juliana-Leveillé-Trudel as well as Fanie Demeule's first novel, known in English as Lightness, also published by Linda Leith Publishing.

"Demeule has captured the essence of early-21st-century ennui"

In Mukbang, Fanie Demeule’s sixth book, the author explores the insatiable hunger of those who were raised on the hollow intimacy of the internet. From a young age, Kim is convinced her parents do not love her, and her only solace lies in interaction with technology.

... Kim is intrigued by mukbangs because they appease her own physical hunger, and she eventually reaches out to Misha for tips and possibly a collaboration, but she is gently rejected. This leads her to create a competition between them – and it ends horrifically.

Kim’s parents, Misha, and Kim’s golden-child cousin Jen are all implicated in the wreckage, and their individual horror stories are inextricably intertwined. This interconnectedness is one of the most powerful aspects of Mukbang, a novel that excels at exploring how the internet is an ephemeral, absurdist graveyard from which nothing can ever be fully erased or removed.

"Mukbang is as intriguing as it is disturbing."
––Léa Harvey, Le Soleil

"In this disturbing dystopian food thriller, Demeule dives into the rabbit hole that is the Internet."
––Dominic Tardif, Le Devoir

"Demeule is building a body of work that explores themes of obsession from all angles. You start her novels full of doubt but are soon caught in the suspense of the ordinary world made very strange."
––Chantal Guy, La Presse