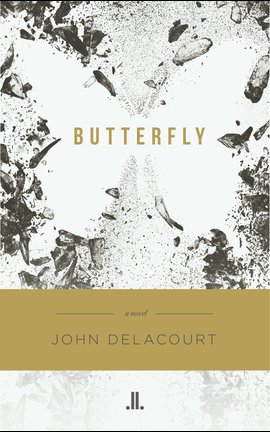 Lucien and Nataša might have slipped toward love, if her past in Sarajevo hadn’t caught up with her. Nataša finds work modeling for a painter in Toronto, but he is murdered. Nataša disappears that night, running for her life. Her vanishing is connected to the discovery of a video, secretly filmed in a small town in Bosnia and Herzegovina during the war. Butterfly is a novel that charts a controlled descent through the dark legacy of war and the underbelly of the global art scene … into a world ruled by a desperate hope for impossible redemption.

John Delacourt is an Ottawa writer whose fiction has appeared in numerous publications in Canada and the U.S. Butterfly is his third novel. His criticism and political commentary has appeared in the Rover, the Ottawa Review of Books, Ottawa Citizen, iPolitics, the Hill Times and Policy magazine. He studied at the Humber School for Writers after graduating with an MA in English Literature from the University of Toronto.
Author website: Jdelacourt.com

Your next summer read

John Delacourt's novel Butterfly combines elements of a murder mystery, a thriller and literary fiction. A Bosnian woman, Nataša Ruži?, becomes involved with a writer, Lucien Bollinger, and with the artist Dejan Vidi?, who is murdered. The novel is written from the perspective of multiple characters in short chapters — sometimes no more than two pages. The novel goes beyond the mystery genre and a key question: is the past ever truly behind us? Everything we do is recorded in one form or another, so we can never know when the past will intrude on the present and what the effects will be.
July 2019, CBC

John Delacourt on All Lit Up

Author John Delacourt takes us behind the scenes of the design process for the cover of his latest novel  Butterfly (Linda Leith Publishing), functioning to tell the story of the novels main character Natasa, who is forced to flee after the Toronto artist she models for is suddenly murdered.

DELACOURT: Each of the three novels I have published has a connection to a question prompted by my experience of visual art. I did not set out to serialize my interests in this way. It has something to do with what Martin Gayford writes in Modernists and Mavericks: “pictures are affected not only by social and intellectual changes but also by individual sensibility and character.” I would also include images produced from film. To me these represent the most profound expressions of sensibility and character - a novelist’s primary materials from which a story comes.

I have fretted and even outsourced a designer for one novel, apologizing to the publisher because I realized I had become that kind of writer. Yet the image chosen for the cover, indeed all the crucial components of the book’s design, will be on a shelf somewhere long after you’re in the ground or incinerated, hoping for another reader. As the Clash’s Paul Simonon said, explaining his taste in clothes, “if you get hit by a bus, you don’t want to be found wearing a pair of flares, do you?”
Read more.
May 2019, All Lit Up

At the heart of John Delacourt’s Butterfly is a simple enough story: blackmail and robbery gone very wrong with the principle characters fleeing the law as well as each other. However, I have come to expect an elevated raison d’etre from any book published by Montreal’s Linda Leith Publications, and Butterfly certainly upholds (if not exceeds) those expectations. There is a lot more here than the crimes of blackmail and robbery. There is murder, art forgeries, and, most horrifically, war crimes, specifically those of the Bosnian War.

I am putting Butterfly on the 2020 long list for “The Very Best!” Book Awards in the Best Fiction category.
Read more.
October 2019, The Miramichi Reader

John Delacourt and Stephen Maher held a joint book launch at the Métropolitain Brasserie on Wednesday night. Both authors celebrated the launch of their third novel. CBC's Adrian Harewood moderated a short discussion on the books.

The seedling of Butterfly was planted over 10 years ago, when Mr. Delacourt was working at Immigration and Citizenship Canada dealing with the years-long fallout of the Yugoslavian wars. The novel shifts between eight different narrators. The protagonist, Nataša Ruzic, falls in love with her writing instructor, Lucien Bollinger. The book is a thriller, so murder, mystery, mazes, and misery follow. The book mixes past and present and gets the reader to reflect on some of the deepest questions of the digital age, and those that have bedevilled humanity for millennia. Fresh off the release of Butterfly, Mr. Delacourt informed Party Central that he has just sent his newest project to the publisher. One wonders how he has time for a day job at Ensight given his prodigiously productive penmanship. Mr. Maher also has another book in the works.

Meanwhile, the topics were heavy, but the mood was light. The party went well past the advertised time of 8:30 p.m., and lasted until about 10 p.m. CBC’s Adrian Harewood hosted a panel discussion with the two about the books, and  guests drank, ate, and chatted through the evening. Mr. Delacourt told Party Central he got to bed at a reasonable hour.
13 May 2019, The Hill Times

Is the past still past if it exists on video? In a culture obsessed with recording itself, skeletons that once disappeared into the closet can re-emerge decades later to bring anyone’s mistakes into the hard light of judgment. The wrong snippet of footage, seen by the wrong person, can come to define a life.

What this means for memory and for revenge are questions the novelist John Delacourt explores in his intricate third novel, Butterfly. Delacourt is an Ottawa-based writer whose previous work includes the novels Ocular Proof and Black Irises. His preferred territory is a dense maze of hidden secrets, set at the juncture of art and politics.
Read more.
29 April 2019, The Globe and Mail

"Delacourt does not fall into the traps of sensationalism or maudlinness"

John Delacourt’s novel Butterfly is hard to read, not because of his writing style, but because of the subject matter and the subtexts. It’s unsettling and raw, but at the same time sad and distanced. The novel is made up of layer upon layer of constructs, leading the reader deeper and deeper into disturbing territory. The subjects and the plot – art fraud, blackmail and murder – serve as mechanisms for the author to introduce the subtexts of war, genocide and ethnic cleansing. Delacourt uses the subtext of the Bosnian War, and more specifically the Bosnian Genocide.
Read more.
March 2019, Seven Circumstances

"It will assuredly be widely acclaimed"

What struck me about Butterfly was the elegance, with which the author unravelled a crime mystery plot, deepening with every chapter the personalities of the main characters. By the end of the novel, I was enamoured with Natasa Ruzic, the female lead, while oddly dismissive of Lucien Bollinger, the male protagonist. Perhaps, it was Natasa's desperate desire to distance herself from her tragically damaged past that intrigued me the most as she rose up to act and then take responsibility for her actions.
Read more.
March 2019, Ottawa Review of Books