Notes of a Born-again Irlandaise, by Linda Leith

I have never felt more Irish than I do this morning. I got back last night from Toronto, that foreign country, to find a friendly invitation to participate, as a writer born in Northern Ireland, in an event focusing on “immigrant and racialized” women. The letter mentioned that it was the Francophone writers' union UNEQ that had referred her to me. I am not yet sure what they actually want me to do alongside the Bosnian from Sarajevo and the Arab woman from Beirut, but will ask.

This is not the first recent reminder of my Irishness. A couple of weeks ago I went to lunch with a gentleman who wanted to discuss the prospects of expanding the cultural offerings around St. Patrick’s Day in March. Last year, at Opening Night of the Blue Metropolis Montreal International Literary Festival, a lovely man who was part of the festival from the outset got up on stage and referred to me as une Irlandaise.

It’s true that I was born in Belfast, as were both my parents and their forebears, but Belfast is not home. I have lived in many cities, and I have been here for so long that Montreal feels more like home than anywhere else.

I have a history here that dates back to my arrival in 1963. My sons were all born here. I have made my career here. I have even, in all my work, been interested in Montreal and its writers, and especially in those of its writers who work in English, as I do.

I have not thought of myself as an immigrant, particularly. I might have, when I was 13, perhaps even when I was 23, but hardly ever since. Immigrants are those who are still new to the city. I have certainly not thought of myself as “racialized,” either, whatever that means. It’s a word that conjures up images of immigrant women from distant lands, women in saris, women in turbans, women in hijabs and burkas speaking Farsi, Pashtun, Dari, Urdu, dozens of other languages.

In comparison with many of whom, I am not only settled but privileged. Privileged by my white skin and fair hair, by my familiarity with the customs of this place, by my education and my experience, and by my position in the literary milieu. Privileged by language, too, for I speak both French and English.

Being a native speaker of English is, however, an ambiguous privilege. Montreal is not only language-obsessed; it is a French-speaking city that is obsessed with English. French and English here were thought of as two different “races,” not that long ago. But Anglophones are not in fact a separate race, just people like me who happen to speak better English than French. Some of us are born and bred here; some of us come from elsewhere. Today, it is easier in some ways to be a visible minority here than a native speaker of English. Easier, even, for some “immigrant and racialized” women than it would be for me to get hired by the City of Montreal or the Government of Quebec.

I do not wish to minimize the difficulties those women have in finding work. My point is quite different. It is that in this brave new world, in which diversity is all the rage and we celebrate the contributions made to our society by people hailing from different cultures and backgrounds, linguistic diversity is seldom even mentioned.

The reason is that language is too dangerous a subject here, too inflammatory, with language tensions flaring once again. The Government of Canada and the Caisse de Dépôt et Placement unfortunately did a good job of bringing language back on to the front burner when they chose to hire senior officials unable to speak French.

An outsider everywhere, I feel in exile in Toronto, where I speak English all the time, far more than I do here in Montreal, where I speak French most of the time. I am not surprised that there is a publication called La Tribune juive here that invites outsiders to contribute. Montreal is the kind of city in which you would expect to find Tribune juive, which is one of the reasons I love it here.

This is my home; I have no other. I have always been treated with courtesy and often – increasingly, it seems – with warmth. We Montrealers are lucky that we don’t live in Sarajevo, or in Beirut, or in Belfast, for that matter. And the reminders that the English language – and the people who speak it – are unpopular with a few Francophones? That’s just part of the cost of living in Montreal.

Which is why this new identity, which is my original identity, intrigues me. Reminders of my Irishness are reminders that I, too, am an immigrant. They feel like friendly reminders. In addition to reminding me I am an immigrant, they are also a way of making me feel at home in a city in which it can be risky to show affection to Anglos. When Montrealers refer to me as Irish, they are trying to help me feel part of this complicated city. I am less an exile now, as an Irish immigrant, than I could ever be as an Anglo. 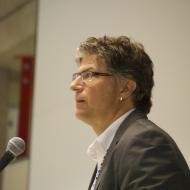