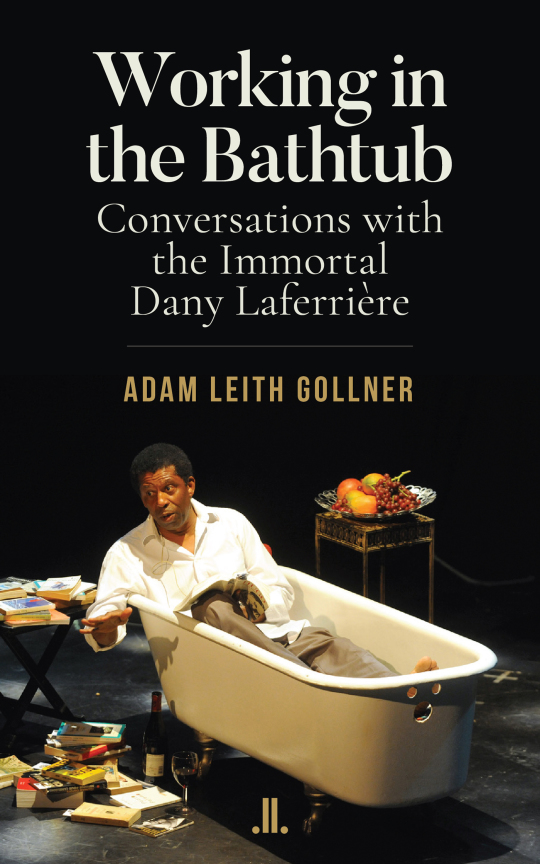 Working in the Bathtub: Conversations with the Immortal Dany Laferrière

Montreal writer Dany Laferrière became “Immortal” in 2015 when he was inducted into the Académie française, the highest accolade in all French literature. He was the first Quebecer to be so honoured, and only the second Black man.

In these wide-ranging interviews with Adam Leith Gollner, portions of which were originally published in The Paris Review, Laferrière reveals how his life and his writing are inseparable, discussing everything from his breakout debut, How To Make Love To a Negro Without Getting Tired, to the extraordinary success of more recent novels such as The Return and I Am a Japanese Writer.

Brilliant, comedic, and full of insightful advice for writers and readers, these conversations also serve as the definitive introduction to one of our greatest storytellers.

Adam Leith Gollner’s first book, The Fruit Hunters (Scribner, 2008), was a national bestseller and was adapted into an award-winning documentary film. His follow-up, The Book of Immortality (Scribner, 2013), won the QWF Mavis Gallant Prize for Non-Fiction. His writing appears in The Paris Review, The New York Times, Vanity Fair, Smithsonian, and The New Yorker online. He lives in Montreal.

Dany Laferrière remembers the confusion he caused among locals after landing in Montreal in 1976. “They didn’t understand,” explains the Haitian-born author in Working in the Bathtub, a new book of interviews, “how someone who worked in a factory, who was black, an immigrant, from an extremely poor country like Haiti, could want to be a writer.”

What happened next may well have puzzled Laferrière’s neighbours even more. His 1985 debut, How to Make Love to a Negro without Getting Tired, made him a sensation. Irreverent and picaresque, set in Montreal’s Carré Saint-Louis neighbourhood, the novel mirrored Laferrière’s life during the 1980s: a Black man from Haiti yearning to be a great writer. Early in the book, the narrator declares himself a “Negro brimming over with unappeased fantasies, desires and dreams. Put it this way: I want America. Not one iota less.” Laferrière got a version of his wish: his fame exploded in Quebec and France, in part because of the controversy generated by the book’s title. (Later titles include Why Must a Black Writer Write about Sex? and I Am a Japanese Writer.) Laferrière has since published dozens of books, winning both France’s Prix Médicis and the Grand Prix du livre de Montréal with his 2009 international bestseller, The Return.

Uncertainty, however, still stalks Laferrière’s career, especially in the rest of Canada, where his reputation seems to have stalled. The last book of his translated into English appeared eight years ago (The World Is Moving around Me, a 2012 memoir on the Haiti earthquake). A total of fourteen titles remain untranslated. As scholar Lee Skallerup Bessette noted in her introduction to Dany Laferrière: Essays on His Works, Laferrière’s notoriety turned him into an object of cocktail-party fascination, someone whose celebrity was premised on the racial dimensions of his books rather than on his literary gifts. He became a symbol of trendy otherness—he was even offered a gig as a TV weatherman in Quebec. But, while his stature grew, consideration for his books did not. “I’m very famous,” Laferrière is reported to have told his French publisher, “but not many people read me.”

... For Laferrière, who fled Haiti at twenty-three after his friend and fellow journalist was assassinated, racialized lives are not solely mired in misery. There is also exhilaration and joy. Defending the validity of happiness for the underclass is the radical pursuit of Laferrière’s work. It’s a pursuit rooted in his upbringing under a dictator. “I severed my ties with Haiti,” he tells Gollner, “to break the great sorcerer’s spell—that of the dictator, who says, You will be obsessed with me, and you will think only of me. I can do other things, but you, you will think of avenging yourself, of getting worked up, and you will think of nothing but me.”

The refusal to play into this doom-and-gloom has put Laferrière at odds with a central bias of English Canadian writing. “Why can’t happiness be just as valid as bad feelings?” he asks.

Dany Laferrière aims to seduce, not convince, as he explains to Adam Leith Gollner in Working in the Bathtub: Conversations with the Immortal Dany Laferrière. To lure readers, Laferrière makes use of the senses––colours and perfumes. "They barely have time to read a sentence and to smell it before they're hit with another scent entirely. Pretty soon they're intoxicated." He adds, "When I try to articulate it, it sounds like a scam."

In this captivating slim volume Leith Gollner explores what makes Laferrière tick. The talk veers from mangoes to money, from priests to politics, from sensuality and sex to vengeance and racsim. The author of over 30 books, including his first, the bestselling How to Make sLove to a Negro Without Getting Tired, and the more recent, intriguingly-titled, I Am a Japanese Writer. Laferrière is also an Immortal, the only Haitian and only Quebecer to ever be inducted into the Académie Française. Since he's not exactly a household name in the English-speaking world, Leith Gollner evidently set out to acquaint a wider audience with this flamboyant yet enigmatic writer. An altogether worthwhile endeavour!
December 2020, Montreal Centre-Ville magazine

In many ways, Gollner has a dream task, dealing as he is with a subject who has long shown a genius for taking positions at once contrary and supremely sensible. When Laferrière titles one of his novels, say, I Am a Japanese Writer, he knows, in this identity-centric era, that it’s going to ruffle some feathers. But he also knows he can back it up – in this case, with his belief that, as he says to Gollner, “a writer is someone who crosses frontiers without being stopped, and without getting caught, both in the imaginary sense and in reality.”

In these pages, such counterintuitive aperçus just keep on coming. No matter the subject, it seems Laferrière can find an original way in, be it the complicated art-and-commerce relationship (“If Basquiat hadn’t been able to sell his paintings, he’d still be alive”), putting his roots to proud use in his work (“I’ve always found it strange that writers thank people in their acknowledgements. I put that into the interior of my books”), the writer as public crusader (“For me, a writer who engages politically is a writer who doubts their own talent”), coffee (“[In Haiti] you need to wait until around the age of nine before they’ll give you grown-up strength coffee”), menial labour (“I had a really hard job in Valleyfield making rugs out of cows”), the value of laziness, writing in bathtubs, and on and on. Pull quotes? It’s like one big pull quote.

Loquacious as his interviewee may be, what Gollner achieves with these conversations is nowhere near as easy as it might look. Firm in his steering of the proceedings, he is still loose enough to respect the natural rhythms of a true conversation; he knows when to keep things ticking and when to let it get discursive and go down byways, many of which would have made for a fine main route. This reviewer, for one, would be first in line for a whole book of Laferrière and Gollner talking about V.S. Naipaul. Hint, hint…

How well do we really know Dany Laferrière? He’s one of Quebec’s most celebrated writers. A sculpture of him (lent by the artist, Roger Langevin) went up in front of the Grande Bibliothèque last month, where it will remain until May. Laferrière has been widely quoted in the French press during the recent N-word debate, and with good reason. Two of the Haitian-born novelist’s books have the word in their title, including his classic 1985 debut, Comment faire l’amour avec un n—- sans se fatiguer. In 2013, he was elected to the Académie française; in 2014, he was appointed officer of l’Ordre national du Québec; and in 2015, he was awarded the Order of Canada.

... Working in the Bathtub is a transportive experience, plunking readers at the table between two authors engaged in a far-reaching conversation that stretches from the personal to the professional, the existential and esoteric.

... Laferrière speaks about his childhood under dictatorship in Haiti; his first decade in Montreal, working all manner of tough jobs; about being forever associated with his rhapsodic debut; about his open relationship with reality, and his aversion to money; about his love of other writers; and his views on race and identity.

... Gollner’s track record as a meticulous author and tireless researcher serves him well. His previous books are anthropological journeys, steeped in curiosity and an intrepid sense of adventure.

...For this reader, finishing the book felt not like an ending but a beginning, and perhaps a middle — a springboard to something more.

Dany Laferrière, a member of the Académie Française (thus nicknamed an “immortal”), is one of my favourite writers, so Adam Leith Gollner’s Working in the Bathtub: Conversations with the Immortal Dany Laferrière was always going to interest me. What I was not expecting was to enjoy most Laferrière’s commentary on finance. And it is true, what he says (I paraphrase): Banks don’t understand money. You want to understand money, you ask a writer.
20 October 2020, The Globe and Mail

"I thought I knew all there was to know about him"

"I've translated ten of Laferrière's novels and a good deal of his other writings, having met him in the mid-1980s, and I thought I knew all there was to know about him. Not at all. Adam Gollner's portrait of the man and the writer opens up the landscape to the fullest, adding a more reflective side to Laferrière. Not without playfulness, of course, but Gollner has managed to draw out something graver behind the legendary artful humour. His willingness to follow Laferrière to the various places where he has composed his books shows his true commitment to his subject."
David Homel, Award-winning author and translator

Working in the Bathtub: Conversations with the Immortal Dany Laferrière made it to the CBC Fall Fiction preview list.
"In 2015, Adam Leith Gollner interviewed iconic Montreal writer Dany Larerrière for the Paris Review, after he had been inducted into the Académie française, which is the highest honour in French literature. Over the course of these conversations, they discussed Laferrière's approach to writing and creativity, how he created his breakthrough debut How To Make Love To a Negro Without Getting Tired, and offered advice to other writers and readers of his work. These conversations are collected in full in Working in the Bathtub."

Working in the Bathtub: Conversations with the Immortal Dany Laferrière has its own profile page at CBC Books.
August 2020, CBC