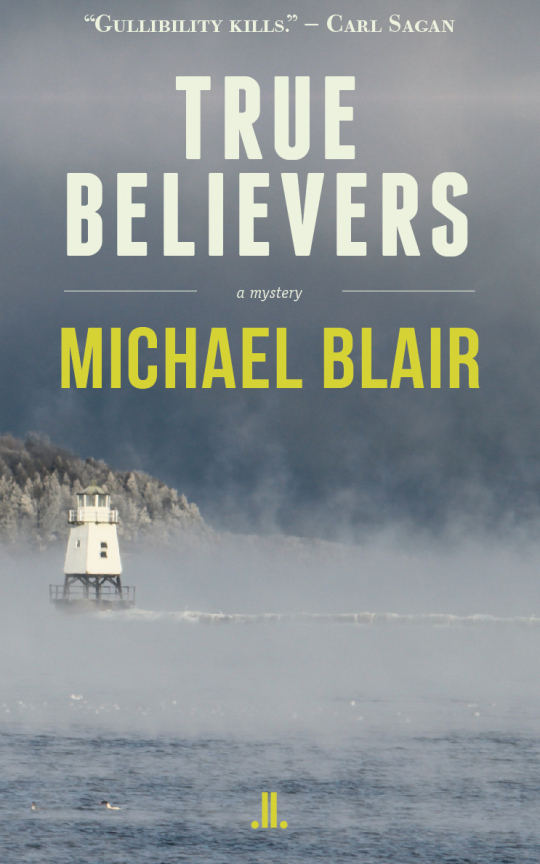 Things are slow for Burlington, Vermont, Private Investigator Hack Loomis, so he agrees to look into the disappearance of his assistant’s friend Belle Ryerson. Belle went missing after attending a meeting of a UFO group run by a charismatic psychiatrist and a disarmingly beautiful woman who claims to be in contact with an alien mother ship. Eccentric as the true believers may be, Loomis soon learns that it’s the people they believe in who are really dangerous.

Michael Blair’s first novel [If Looks Could Kill, M&S, 2001] was shortlisted for the 1999 Chapters/Robertson Davies Prize and the 2001 Quebec Writers’ Federation First Book Prize. Since then he has published four more novels, most recently Depth of Field [Dundurn, 2009]. The Evil That Men Do was published by LLP in 2017. He lives in Montreal, where he works as a freelance technical writer and editor.

May 4, 2015: Out of this world reads on All Lit Up: start with Michael Blair's True Believers.

“Blair is a polished storyteller, poised to take his place among the best in Canada today.” — The Hamilton Spectator

“Blair has the goods, and just keeps getting better.” — London Free Press

“Insightful and evocative with a tone reminiscent of To Kill a Mockingbird.” — Sherbrooke Record

“Terrific characters who really click in this slick, smart book.” — Margaret Cannon, The Globe and Mail

“Twisted and complex. Five out of five!” — Telegraph-Journal

Michael Blair examines the will to believe

Canadian crime writer Michael Blair is one of the most under-appreciated writers in Canada. He can, by turns, fashion an intrig-uing mystery to challenge his readers, or a poignant account of a troubled homecoming, or simply a fast-moving tale that keeps readers wanting more. In his latest work he shows that he can even enter worlds that fantasies are made of, and come out the other side with a perfectly plausible tale, not at all removed from reality.

Near Burlington Vermont, not far from the Canadian border, a retired school teacher walking her dog along the shore of Lake Champlain has made an unwelcome discovery. It is the body of a woman, partly frozen in the ice. The police set about their work, made easier by the fact that a business card is soon found in her clothing. It belongs to Hack Loomis, a local PI.

Like many in his profession, Loomis is scratching out a precarious living from too few clients. He lives in an Airstream trailer on the unfinished building site of what was to be a home with his ex-wife, before their relationship had gone south. His business partner and lover Connie Noble adds both a page to his professional book and a much-needed dimension to his personal life.

When the Burlington Police contact him about the body, Loomis suspects he knows who it is. Belle Ryerson was employed by a local law firm for which he’d previously done some work. She had recently set up an appointment with Loomis, but had failed to show. Something — or someone — intervened before she

could keep her appointment. But when he arrives at the office of the Chief Medical Examiner, he’s puzzled: it’s not Belle. In fact, he’s never seen this woman before.

The police focus on the victim, but Loomis is concerned about Belle. He tries to contact her through her employer, but she hasn’t appeared for work.

They turn to Belle’s sister Hazel. Although they share the same house, they lead virtually separate lives. Hazel is unconcerned. Belle is an independent woman, a skilled out-doorsperson and wildlife photo-grapher. But when a search of her rooms reveals that she’s not taken her back-pack, nor her photographic gear Hazel becomes apprehensive, and wagrees to them looking into things.

Returning to the legal firm where Belle worked, Loomis asks permission to give her workstation a quick onceover, and to his surprise they agree. Among the papers on her desk he finds a flyer for something called the Kentauran Foundation. It doesn’t take him long to track down the organization. Founded by psychiatrist Dr.Thaddeus Kellerman, it counts among its members a woman who insists she’d been abducted by aliens, and a former NASA astronaut who says he witnessed a UFO and had been abducted while on a NASA mission in 1984. Kellerman himself claims to be in contact with dissident aliens called Rigilians, who believe the Earth is on the verge of collapse and want to take earthlings to another planet. With a membership of nearly three hundred people, the Foundation is preparing to construct a powerful radio transmitter in Costa Rica to contact the aliens and arrange for the voyage. It all seems unbelievable.  Had Belle somehow infiltrated the group, discovered a nasty secret, and perhaps paid with her life?  And what of the body in the lake?

Author Michael Blair weaves a tale of duplicity that would do a professional con artist proud.  The reader warms to Hack Loomis immediately. He is both Everyman and the underdog, sur-rounded by adversaries but never conceding defeat. If I have a reservation about Loomis, it is his personal hygiene habits: bathing only twice a week doesn’t endear him to readers. On the other hand, Loomis’s relation-ship with sidekick Connie Noble is nicely nuanced, as she is clearly taken by him but realistic about their chances of making their business relationship succeed. The other characters are equally well drawn, and the dialogue is spot on, tailored to each individual, whether the arrogant head of the law firm where Belle Ryerson worked, or her trusting, but naïve, sister Hazel. Blair deftly taps into the popular belief that intelligent life must exist on other planets to fashion a convincing tale of gullibility and greed, setting it in northern Vermont, an area he knows well, and leavening his story with his trademark sly humour. The result is an entertaining excursion into the rarified realm of true believers, those who desperately latch onto what they want to believe.

Originally published in the Montreal Review of Books, March 2015.

Since 2005 Jim Napier's reviews and interviews have appeared in several Canadian newspapers and on such websites as Spinetingler, The Rap Sheet, Shots Magazine, Crime Time, Reviewing The Evidence, January magazine, the Montreal Review of Books, the Ottawa Review of Books,and Amazon.com, as well as on his own award-winning site, Deadly Diversions.  He can be reached at jnapier@deadlydiversions.com

A great first review for Michael Blair's True Believers: "Deftly tapping into the commonly held belief that intelligent life must exist on other planets, Blair fashions a convincing tale of gullibility and greed, leavening his story with his trademark sly humour." -- Jim Napier, Montreal Review of Books