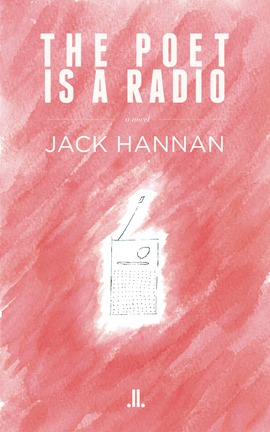 The Poet Is a Radio

Li Bai has journeyed across the world and perhaps across centuries. When he comes across a bag of money in a downtown parking lot, we also meet the delinquent who lost the bag of money in the first place. The assemblage in Jack Hannan’s first novel are driven by wordsmithery, trickery, and flights of such fancy—for an instant, the signal comes in clearly, and we might all step into this world where anything is possible.

SHORTLISTED for the 2016 QWF Paragraphe Hugh MacLennan Prize for Fiction

Jack Hannan has been a hotwalker, a typesetter for Fred Louder, a bookseller, and a publisher. Some Frames was shortlisted for the 2011 QWF A.M. Klein Prize for Poetry. The Poet Is a Radio was shortlisted for the QWF Hugh MacLennan Prize for Fiction. His second novel, I Am the Earth the Plants Grow Through, will be out with LLP in the Fall 2021. He lives in Montreal.

“What if the world were composed of poets? The question is raised in The Poet Is a Radio. Money and love, avarice and sensibility are arrested in an ebb and flow of linguistic and essential delights, as poets and poetic souls encounter one another, coping with our time and place. Jack Hannan demonstrates how poetic sensibility alters the electric current of the world.”
—Trevor Ferguson

"Earlier this week, while decrying the literal-minded reception to Beyoncé’s latest project, a friend reminded me of that Marshall McLuhan joke: “A man’s reach must exceed his grasp or what’s a metaphor?” A timely quote as I considered two books about poets published this month, both titles containing those grasping metaphors: Jack Hannan’s novel, The Poet is a Radio, and Ken Sparling’s This Poem is a House. The former opens with an old man, Li Bai (as in eighth-century Chinese poet Li Bai), recently moved to present-day Montreal, who one evening discovers a duffel bag of cash. It’s clearly not intended for him. He takes it anyway. From there the story spirals outward to Li’s associates, three couples. Meanwhile, two hooligans hunt for that bag of dough. One couple’s storyline receives too much emphasis in my view, but over all this is a charming story about the place of poetry in everyday life."
—Jade Colbert, The Globe and Mail

"Unanswered questions are everywhere in The Poet is a Radio. The novel clearly states it is set in Montreal – and succeeds in capturing some of its moods – but the relationship the city in the book bears to its real-life counterpart is fuzzy. It isn’t just that the names of streets and bridges and metro stations have been changed. It’s also that Hannan’s Montreal is a kind of post-economic wasteland, where the remaining pockets of vitality are an exception to the rule.

The novel is a snapshot of one of those pockets of vitality: the staff members and customers of a bookstore on the brink of bankruptcy, who are all trying to wake Montrealers up out of their computer-daze. The owner, named (but not modelled) after another real-life poet, Kenneth Patchen, refuses to sell e-books and t-shirts and tote bags in the place of paper-and-ink books. His employee J.-S. spray paints poems onto the asphalt of the street, hoping to fill a whole block with beautiful words. Habana de Curra, who often comes to the bookstore to browse and chat, learns languages “the way other people put on weight.” Dwayne, the Stetson-wearing Poet of the Blue Line, drops pages of his poems into commuters’ laps, shouting “Look at yourselves, you’re dog tired, bone dry, deep in debt, and you’re all going to die.”

...It may be hard to pinpoint exactly what The Poet is a Radio is about. But it leaves you with an image that hits home: someone passing through a foreign city, wanting both to forget and remember all of the different lives he led in what feels like some distant century, thousands of kilometres away.
––The Montreal Review of Books

“Tender, innovative, constantly surprising, The Poet Is a Radio explores a familiar city that proves to be a world unto itself. Jack Hannan’s prose is alive to both the wild frequencies of the imagination and the static of everyday life. His writing is a lucid dream.”
—Mark Abley

“There’s a smokiness to the way Jack Hannan sees the world, and it creates its own reality—in this case, a world in which Li Bai, the eighth-century Chinese poet, can show up as an elderly immigrant, a loner living in a warehouse by the river, in a city that both is and isn’t Montreal at the turn of the second millennium. In this dreamlike city, a handful of other singular souls, drawn together by a love of books, art, words and language, collide with Li Bai and with each another in a kind of dance. The storytelling is hypnotic, layered and mysterious, stereophonic, moving through the perceptions of these very different characters until their separate trajectories briefly converge in something like a living poem.”
—Robyn Sarah