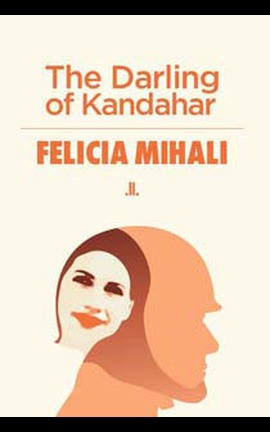 Born in Romania, Felicia Mihali has lived in Montreal since 2000. After studies in French, Mandarin and Dutch, she specialized in Postcolonial Literature, Art History and English Literature. She is co-founded of the webzine Terra Nova, and has published seven novels in French with the literary house XYZ Éditeur since 2002. The Darling of Kandahar is the first of her novels to be written in English.

When Felicia Mihali's first novel appeared in French in 2002, it was compared to Marie-Claire Blais's masterpiece, A Season in the Life of Emmanuel. Making her English-language début with The Darling of Kandahar, Mihali now joins Nancy Huston as one of the few writers working in English as well as French.

"In 2007, 24-year-old Kinga Ilyes posed for the cover of MacLean’s annual university issue. A Canadian soldier, Chris Karigiannis, stationed in Afghanistan, saw the cover and wrote to the magazine praising Ilyes’ “natural beauty and incredible sexiness,” a far cry from the “superficial and very overdone” Playboy magazines the soldiers were used to. This exchange charmed many people and Ilyes was photographed again for the magazine and became known as the darling of Kandahar. Shortly after sending a second letter to MacLean’s, Karigiannis was killed by a roadside bomb. He was to be in New Zealand the day he died, but a postponement kept him in Kandahar for one more fateful day.

In her newest novel, The Darling of Kandahar, Felicia Mihali uses this story to explore a young woman’s life of love and loss. This is Mihali’s first novel in English, and the prose is at once lean and economical, but also razor-sharp in its depiction of the life of an outsider. Irina, an immigrant from Transylvania, is Mihali’s stand-in for Ilyes. Her first-person voice is unflinching and wise, and manages to avoid the usual tropes of a 24-year-old protagonist in love.

The novel is set in Montreal, and Irina often turns her attention to the city’s fraught history. A significant portion of the novel is dedicated to Irina and her best friend, Marika, re-enacting the story of Jeanne Mance and the founding of Montreal. This is done with such a startlingly acute analysis of those apostolic settlers, that one wonders if such a perspective can only be achieved by somebody who has not been taught to take pride in this history.

Irina balances her intelligence and honesty, while never seeming to let her guard down. She also finds this to be true of her two boyfriends, also immigrants. When she goes to Henry’s house and meets his family of Chinese immigrants, they appear to have nothing in common with her family’s struggle. “Despite the atmosphere of tidiness and elegance in each room, the presence of certain objects revealed the kind of isolation that comes to a family whose guests all tend to share their own origins.”

Mihali explores the particular isolation of an immigrant whose notions of love, it would seem, are seeped in the expectation of loss. Similarly, when her best friend moves away, Irina claims that “Marika’s departure healed [her] of feminine friendships.” Irina is a person who carries with her many pre-emptive wounds.

The last third of the book contains the familiar MacLean’s story. Irina and the soldier, Yannis, exchange letters where they discuss many pithy subjects, such as the war in Afghanistan, in very frank terms. “I know people say we are waging a war against barbarians, but the barbarians they talk about are simply afraid to long for things they are taught to despise. […] They are survivors of a legendary past that is as real as their ruined present.”

These correspondences are not at the centre of the story, but instead provide yet another bleak reality with which Irina has become acquainted. “I wish I could tell you more about the real Afghanistan,” Yannis writes, “but at present, as before, this country is just fiction. As you must know, to describe fiction takes more fiction.” Yannis sounds a lot like Irina. They both live in their minds because they understand how much pain the world has to go around.

The Darling of Kandahar is a pessimistic story. All of its characters have struggled more than most, and this prevents them from finding respite in the company of others. Irina’s brief relationship with Yannis is enough to sustain her, simply because it contained less pain than it could have. She is not open to the possibility of happiness, because the chance of loss is even greater. But Irina is young, and although she hasn’t much hope, we expect she is not yet defeated."
––by MICHAEL LAKE , The Rover 09.09.2012

The Darling of Kandahar review in Montreal Review of Books here

The Darling of Kandahar in Maclean's and The Globe & Mail

And Greg Quill in the Toronto Star focused on the innovative nature of LLP's publishing programme:

"With the launch two weeks ago of her first e-book and print titles — Keeping the Public in Public Education by Rick Salutin, and The Darling of Kandahar, the first novel by Romanian expat Felicia Mihali — newly minted Montreal publisher Linda Leith has joined a growing number of boutique publishers in the U.S. and Europe who see new opportunities in the shifting realities of the book business. Salutin's is Linda Leith Publishing's first title "in a series of provocative short-form books comprising essays under 100 pages in length," she said. "One of the opportunities in this brave new world is the ability to experiment, via e-books, with non-traditional formats and manuscript length," Leith added. "That would not have happened in English-language publishing even a year ago."

You feel like thanking Felicia Mihali for moving here from her native Romania. Her first novel is an unexpected gift. — Le Devoir (2002)

Mihali is one of the writers from different backgrounds who have been transforming our literature since the end of the 20th century. — Canadian Literature (2008)

The Darling of Kandahar a top Quebec pick for Canada Reads!

October 24, 2012: Felicia Mihali's novel The Darling of Kandahar has just been named among the top Quebec picks for Canada Reads 2013! See the full story here.

Felicia Mihali appears at Calgary WordFest
Calling all Calgarians! Don't miss your chance to meet Felicia Mihali, author of The Darling of Kandahar. She'll be at this year's Calgary WordFest, appearing with GG-nominated author Noah Richler on War: What is it Good For and other events.

The latest review of The Darling of Kandahar is by Michael Lake in The Rover: "This is Mihali’s first novel in English, and the prose is at once lean and economical, but also razor-sharp in its depiction of the life of an outsider."