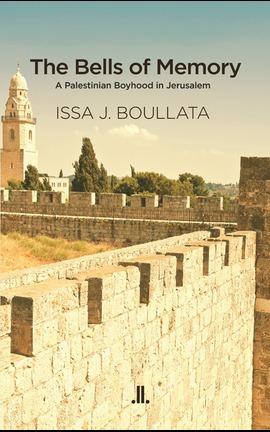 The Bells of Memory: A Palestinian Boyhood in Jerusalem

An LLP Singles essay
Issa J. Boullata grew up in a Palestinian family in the Jerusalem of the 1930s and 1940s, when Palestine was under the British Mandate. His memoir, The Bells of Memory, is delightful in its reflections on an idyllic youth and detailed in its recollections of family members, classmates and teachers, remembered scents and foods, the pleasures of reading, and his early experience of the working world. This is a love letter to a Jerusalem that was changed immeasurably by Al-Nakba, the Palestinian Catastrophe of 1948 that dispossessed the Palestinians of their homeland and dislocated many as refugees when Israel was established.

SHORTLISTED for the 2014 QWF Mavis Gallant Prize for Non-Fiction

Born in Jerusalem, Issa J. Boullata is a Palestinian writer, scholar, and translator who taught Arabic studies at Hartford Seminary, Connecticut, before moving to Montreal, where he taught graduate courses in Arabic literature, Modern Arab Thought, and Qur’anic Studies until recently at McGill University’s Institute of Islamic Studies. The author of several books on Arabic literature and on the Qur’an, he is a noted translator of Arabic literature and has twice won the Arkansas Arabic Translation Award. He is contributing editor of Banipal magazine.

Comments of the jury for the 2014 QWF Mavis Gallant Prize for Non-Fiction on The Bells of Memory: A Palestinian Boyhood in Jerusalem, by Issa J. Boullata:

"A unique blend of the personal, historical and political. Restrained but lyrical prose, a fascinating look into a vanished way of life, a powerful because understated political pamphlet: Bells of Memory is a book that makes a difference. Arising out of this very individual memoir is a political protest against the injustice of his country being taken away from him--a protest that is all the more powerful because stated in restrained fashion."

The Bells of Memory: A Palestinian Boyhood in Jerusalem, by: Issa J. Boullata, reviewed by Mahmoud Muna, The Educational Bookshop, Jerusalem, This Week in Palestine, # 197, September 2014.

The bells of memory are eloquent writings on the life of a boy during the period of pluralistic Jerusalem in the thirties and forties. Boulatta grew up in a Palestinian Christian family in Jerusalem, and through this book he offers a very informative glimpse into the social, political, and cultural life in the city before the Nakba of 1948.

Issa J. Boullata is a writer, scholar, and translator who has written extensively, taught widely in Palestine, and lectured internationally throughout the last three decades, most notably as a professor of Arabic studies at Hartford Seminary, and professor of Qur’anic and Islamic studies at both McGill and Montreal universities.

In this short book, he presents us with a touching, well-written memoir of growing up Palestinian in Jerusalem under the British Mandate. The style is very descriptive, yet vivid; rich, yet entertaining. Reading the stories will take you on pleasant journey through time and will show you life and normality in Jerusalem from almost 100 years ago.

The chapters of the books are well balanced between the personal accounts and the historical and political narrative of the city. The mood changes according to chapter, which vary considerably in length. All together they present a picture of the boy he was in the 1930s and 1940s and tell some of the events he witnessed and the people whose life paths crossed his. All speak of the city he loves infinitely and “will love to the end,” according to his words.

“It was my first day at school in the autumn of 1934, and I had been looking forward to it all summer. I did not know what to expect. All I desired was to learn how to read and write like the adults. Yet, here I was, listening to beautiful Arabic words I had not heard before, which I could not recite with the other children because I did not know them by heart, as they did. So I listened, and I realized that the words were a prayer to God, different from the prayer I had been taught by my parents at home and had repeated silently at the beginning and end of every day.”

With plenty of books about the city of Jerusalem, this book offers the unique opportunity to see Jerusalem not through the observer’s eyes, but rather through the eyes of Jerusalemites themselves. As the distinguished Boullata writes detailed recollections of family members, classmates, and teachers, remembered scents and foods, the pleasures of reading, and his early experience of the working world, you will quickly realise how the series of love letters to Jerusalem changed immeasurably because of the Nakba, when Palestinians lost their homeland and became refugees.

The book comes at an important time, when we see the city changing politically, economically, and socially in front of our own eyes. It is at this time more than ever that we need to look over our shoulder and assess the change, to evaluate the direction that leads towards our destiny, even if we seem to have little control over it. It is through the story of such an amazing man that a great deal of information can be learned. I have no hesitation in recommending this book to anybody who seeks to put a human face on historical events, which often overshadow the personal narrative.
♦ Linda Leith Publishing, 2014, 87 pages, $15.00

August 26, 2014: Yet another great review of The Bells of Memory: A Palestinian Boyhood in Jerusalem, by Issa J. Boullata. "What Remains," by Ayal Victoria McKhail, Literary Review of Canada, Sept. 2014, p. 13: "This is a hauntingly beautiful account of the bells of memory that still toll for so many Palestinians wherever they may find themselves on this earth."

The latest review of Issa J. Boullata's The Bells of Memory: A Palestinian Boyhood in Jerusalem: "This is but a biography of one Palestinian Arab, but an important member of that community’s intelligentsia and literati. One can acquire an important glimpse into the character and quality of life in Palestine in the 1920s, up to the late 1940s; hence an important contribution."  Middle East Media and Book Reviews Online, June 2014.

Publishers Weekly review of The Bells of Memory: "The book will appeal to those interested in the milieu of Jerusalem before the advent of sectarian violence."

The Bells of Memory: A Palestinian Boyhood in Jerusalem
Issa J. Boullata
Linda Leith Publishing (LitDistCo, North American dist.), $12.95 trade paper (96p) ISBN 978-1-927535-39-4
Orthodox Christian, Palestinian Arab, and former Arab literature professor at McGill University, Boullata’s memoir is of his youth in Jerusalem’s Old City in the decades preceding Israel’s formation in 1948. Boullata’s autobiographical sections afford local color, as when he portrays how “men frequented coffeehouses, among which some had a storyteller to entertain their clients until a late hour with customary narratives, chivalrous romances, and folk epics.” The account flourishes when describing Boullata’s courtyard home in Jerusalem’s Christian Quarter and his mother’s cooking, or when highlighting various Arab writers and teachers of the period who influenced Boullata’s own career. Personal memoir strays into political history, and while his views are clearly sympathetic to the Palestinian cause, the book will appeal to those interested in the milieu of Jerusalem before the advent of sectarian violence. (Apr.)

"Issa Boullata invites us to catch glimpses of his life in a Palestinian family in the uniquely pluralistic city of Jerusalem in the 1930s and 1940s. Writing simply, sympathetically, but wisely, he tells us about his life experiences at home, at school, and in society against the backdrop of the gathering political storm that culminated in the Palestinian Nakba of 1948. This book will undoubtedly leave a lasting impression on its readers."  -- Dr. Sari Nusseibeh, President of Al-Quds University

"The Old City of Boullata’s youth is depicted as a harmonious blend of cultures, a place where “Jerusalemite Christians did not eat publicly in the presence of Muslims in consideration for their fast” and where Christians and Muslims alike enjoyed the Ramadan pastries and sweetmeats." – Montreal Review of Books

Congratulations, Issa J. Boullata! The Bells of Memory: A Palestinian Boyhood in Jerusalem is a finalist for the QWF Mavis Gallant Non-fiction Prize. The Gazette story here.

Linda Leith Publishing is delighted to announce the sale of French language rights to The Bells of Memory: A Palestinian Boyhood in Jerusalem, by Issa J. Boullata, to Mémoire d'encrier.