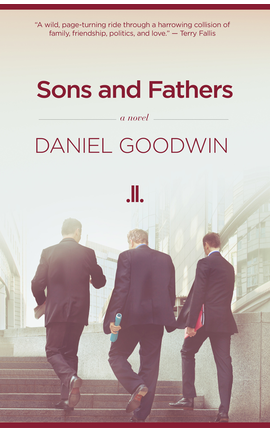 Sons and Fathers is a novel about men. It tells the story of how three men use their talent to help and hurt each other – and compete with the accomplishments of their fathers.

Three friends, three sons, each with a talent for words he learned from his father. Eli, Michael, and Allan were friends at McGill, and their lives continue to intersect as they make their ways in the shadow of the Peace Tower in Ottawa.

Born in Montreal, Daniel Goodwin has lived and worked across Canada as a journalist, teacher, and communications and government relations executive. His writing has appeared in The Globe and Mail, The Calgary Herald, The Telegraph Journal, The Antigonish Review, and The Literary Review of Canada. He lives in Calgary with his wife and three children. Sons and Fathers is his first novel.

"In Sons and Fathers, Daniel Goodwin takes us on a wild, page-turning ride through a harrowing collision of family, friendship, politics, and love.” – Terry Fallis, author of No Relation

June 21, 2015: Father's Day! -- and what better book to feature onCBC Radio's Fresh Air than Daniel Goodwin's Sons and Fathers. The segment will air around 8.30 a.m. Sunday. Here's the podcast.

April 20, 2015: Another good review for Sons and Fathers, this time in Canadian Jewish News.

Dec. 17, 2014: "For the Political Junkie: Daniel Goodwin's first novel, Sons and Fathers, is set in Ottawa against the backdrop of national politics, journalism, and spin, and has been called "a wild, page-turning ride" by author Terry Fallis. In a Q&A with All Lit Up, Goodwin explains, "I wanted to describe what it was like to be a certain kind of man in the late 20th and early 21st centuries. These guys are all very articulate and thoughtful and self-aware up to a point but they’re also clumsy, occasionally self-deluded, and they sometimes do dumb things." They sound...nearly human!" -- Kelly Clare, 49th Shelf

Daniel Goodwin, author of Sons and Fathers, blogs about the reasons men don't read fiction (but should).

Great feature on Daniel Goodwin's first novel Sons and Fathers on the spanking new website All Lit Up.

"The narration is rich in pithy observations. Playing chess together in youth, Michael asks Eli, “Do you play to win, or do you play not to lose?” Eli reflects, “I realized I wasn’t good enough to play to win.” But as a writer, he can ensure that Allan, who does play to win, wins. Poets fear they are “charlatans who puffed themselves up with inflated claims of influence because they had none to speak of.”

On leadership: People say they want compassion, “but what they really want is someone they can trust, who is strong and courageous — when the going gets tough, we want to know if our leader will talk nice to us or defend us.”

This novel’s timing is fortuitous. The going is certainly getting tough, and the looming federal election is stacking up as a test of that observation." -- Barbara Kay.

First review, by Mark Sampson, in Quill & Quire: "Goodwin has pulled off a sharp, clever début. His prose is strong and his characters memorable. Sons and Fathers is an enjoyable read."

Nice start! LLP author Daniel Goodwin's first novel Sons and Fathers is featured on The 49th Shelf's fall fiction preview and will be featured on the fall promotion of first novels now being planned by the Literary Press Group of Canada.