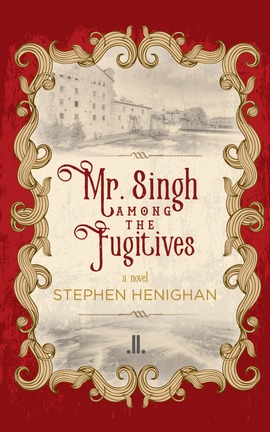 Mr. Singh Among the Fugitives

R. U. Singh has always known he is destined to live the life of an English country squire. After a few false starts, in Bombay, Thunder Bay, and Toronto, he settles into a comfortable existence as a small-town Ontario lawyer, much solicited for the diversity he lends committees and conclaves. But—lest he forget—he is accepted only at the whim of his woman in white, a commanding university administrator, and by her whim can also fall. Mr. Singh Among the Fugitives sends up the multicultural aspirations of Canadian identity, pokes fun at our glitterati, and, tongue firmly in cheek, issues a warning: be careful who you pretend to be.

STEPHEN HENIGHAN is a novelist, academic, and translator. He is the author of over a dozen previous books, including the short story collection A Grave in the Air and the novel The Path of the Jaguar. He has been a finalist for the Governor General’s Award, the Canada Prize in the Humanities, a McNally Robinson Fiction Prize, a National Magazine Award, and a Western Magazine Award. Henighan is a columnist for Geist magazine and General Editor of the Biblioasis International Translation Series, and teaches Spanish-American literature at the University of Guelph.

Jade Colbert's long, thoughtful piece in The Globe and Mail, "Other Voices":

"CanLit has seen three major controversies in six months: the UBC Accountable letter (in which dozens of prominent authors were seen as rushing to the defence of Steven Galloway), the questions surrounding Joseph Boyden’s ethnicity and now Niedzviecki’s editorial. It has been a disillusioning experience for many. Taken together, these controversies could suggest that Henighan is right, and CanLit is controlled by a cabal of powerful writers who pay lip service to diversity but care little for marginalized writers, which is one of the takeaways of Mr. Singh Among the Fugitives."

The Toronto Star review of Mr. Singh Among the Fugitives:

The bite in Henighan's satire comes from his observation that Mr. Singh has come to exactly the right place: The CanLit establishment, after all, is still very much stuck in the 19th century. The mandarins of culture rule over what is symbolized with a cosy garden party that Mr. Singh crashes by stepping through a hedge...
"What makes Henighan's satire work is its measured tone and ambiguity. His representation of the cultural elite as lazy and complacent, corrupt and entitled, greedy, hypocritical, privileged and vindictive, is unmistakably fierce, but it's presented in a reserved manner that allows for subtle moral shadings."
--Alex Good, "CanLit sweetly satirized," Toronto Star, 15 April 2017

"One must also recognize that a group-think mentality and a kneejerk obeisance to the cant of the moment is far stronger in southern Ontario than elsewhere  in Canada.  A society where everyone always agrees on what is the right and the wrong thing to say or write does not encourage striking out in new directions. Northrop Frye described southern Ontario as, “one of the most brutally inarticulate communities in human history.”  This, like the region’s conformism, is a product of a long, obedient colonial history."

"Are there facets of Canadian culture that are somewhat Victorian in your estimation?

Of course, that’s why southern Ontario is as it is. This country was created as a Victorian project. 1867, the year whose sesquicentennial we’re celebrating, was the height of the Victorian era. Canada’s birth is even a subplot in a Victorian novel: Phineas Finn by Anthony Trollope, where the protagonist is elected to the British Parliament and has to work on the British North America Act.  The combination of generous altruism and complacent superiority that is central to Canada’s national character is an inheritance from the charitable-yet-haughty Victorians who founded our country and created our institutions."

"Stephen Henighan is a persistent thorn in the side of the Canadian literary establishment, but also a fearless and perceptive observer of our culture."
--Quill & Quire

"He not only kills sacred cows, but he tortures them first."
--University of Toronto Quarterly