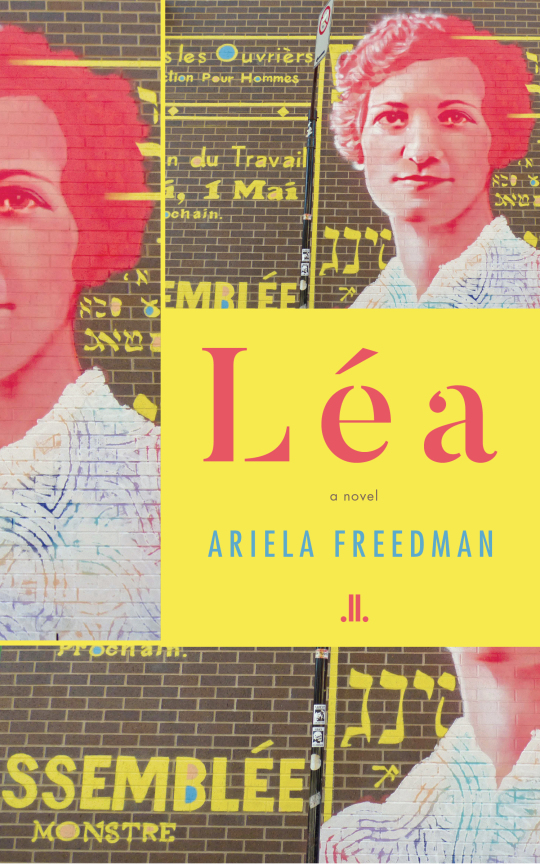 How do you change the world? Meet Léa, polyglot, labour activist, farbrente feminist. Born to a large Jewish family and raised in a French Catholic town, Léa moves fluidly between languages and cultures. Her search for meaning and her instinct for justice place her at the centre of the great changes of the 20th century. From street fights in Berlin to protests in Montreal, she defies the expectations and limitations of women’s lives, wins historic victories for the union movement, and grapples with her own convictions.

Based on the life of famed activist Léa Roback, this novel brings to life a heroine emboldened by political struggles that resonate to this day.

Ariela Freedman was born in Brooklyn and has lived in Jerusalem, New York, Calgary, London, and Montreal. She has a Ph.D. from New York University and teaches literature at Concordia’s Liberal Arts College in Montreal, where she lives with her family. Her debut, Arabic for Beginners (LLP, 2017), was shortlisted for the QWF Concordia University First Book Prize and won the 2018 J. I. Segal Prize for Fiction. Her second novel, A Joy to be Hidden (LLP, 2019), was shortlisted for the Segal Prize in 2020, and was a finalist for the The Paragraphe Hugh MacLennan Prize for Fiction.
[Photo: Lev Wexler]

"A feast for the senses"

The novel is a feast for the senses, rich prose bringing its varied locales to life. The tumult of the first half of the twentieth century is palpable... The struggles against fascism, antisemitism, and labour exploitation remain relevant twenty-two years after Léa Roback's death. Ariel Freedman's novel offers an opportunity to turn to fiction to learn from Léa's remarkable life.
Read more.
11 September 2022, The Miramichi Reader

"She looked like she was gazing right at me."

Ariela Freedman, All Lit Up

Ariela Freedman writes a beautiful essay on how Léa Roback became Léa.
"I first saw her on a Jane’s Walk at the corner of St. Dominique and Mont-Royal avenue. She looked like she was gazing right at me. The mural of Léa Roback, full-face and gazing benevolently on the Plateau passersby, was the final destination of our walking tour about the textile workers and labour activists of Montreal."
Read more.
March 2022, All Lit Up

Freedman’s novel starts with Léa walking the picket line in a successful garment workers’ strike in Montreal that she helped organize in the 1930s after she came back to North America. The book then doubles back to tell the story of her life up to then. It ends in August 1945 when the US drops the first atomic bomb on Japan. “This changes everything,” one of her fellow Communist friends says. And it does, in a way.

Readers today may find Léa’s years as a Communist hard to forgive or even understand, given the political repression in the USSR for much of the 20th century. But when Léa joined the Party, there was so much wrong with the world that radical propositions seemed worth considering, or even fighting for. Freedman ends her novel: “She will leave the Party, but all her life, she will embrace the struggle.”

That she certainly did. As Lea ended our conversations nearly four decades ago: “Basically what I want is that, when I look in the mirror, I want to be able to say to myself, well, I tried.” Words to live by, I think. Freedman does us a great service in telling Léa’s story in such an engaging way.
Read more.
26 April 2022, Montreal Review of Books

Léa Roback (1903-2000) was instrumental in unionizing women in the garment industry, leading a massive strike in 1937. She also fought for women’s suffrage, which was only achieved in Quebec in 1940. A committed Communist until the late 1950s, she continued to battle for social justice of all kinds and peace, marching in the streets until her 90s.

Historical fiction is a departure for Freedman whose two previous novels, while not autobiographical, dealt with times and places with which she was familiar and were in the first person. Arabic for Beginners won the Jewish Public Library’s J.I. Segal fiction prize in 2018 and A Joy to be Hidden was shortlisted in 2020.

... Because Roback’s life was so long and full, Freedman decided to end her narrative in 1945. Her nearly 300-page book offers a portrait of what made Roback who she was: how her convictions were formed and, more speculatively, her disenchantments.

... Freedman was struck by how Roback bridged the linguistic and cultural gap between Jews and francophones that so marked the period, gaining the respect of French-speaking Catholic workers often from rural areas. Léa opens with the scene of 5,000 striking young women in the streets, Roback in the lead, is shouting and singing as confused baton-wielding police look on.

...The cover of Léa is the mural paying tribute to Roback that was on a wall on St. Laurent until recently. After repeated vandalism—perhaps because of the Yiddish words on it—the city recently removed it.

Freedman said Roback’s imperative to “do something” was a personal beacon during the darkest days of the pandemic. “I made chili for a homeless shelter, delivered for a food bank, started going to protests and marches.”

"Both a portrait of an exceptional life and a gimlet-eyed view of the upheavals of the first half of the 20th century, Ariela Freedman’s novel reads like a real-life Bildungsroman. Léa, indomitable and idealistic, journeys from adolescent inklings of social inequities through a believably, tenderly, and, often necessarily brutally evoked series of political awakenings and disillusionments which carry the reader seamlessly from Montreal to France, New York, Berlin, Rome, and Moscow. Utterly engaging, Léa is a welcome addition to the literature of social justice."
––Zsuzsi Gartner, author The Beguiling and Better Living Through Plastic Explosives