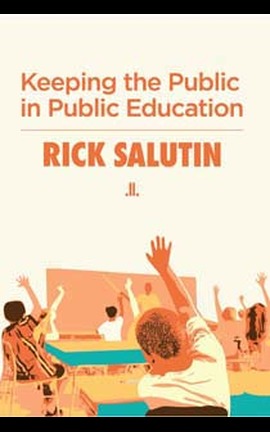 Keeping the Public in Public Education

An LLP Singles essay
Is there anything public schools do that no other form of education can? Only this: Simply by being what they are, they can teach kids about the society they live in. That's because public schools must let everyone in. What's unique about public education isn't the education part; it's the public.

Keeping the Public in Public Education is the first in Linda Leith Publishing's pioneering Singles series of short essays published in print and electronic form.

Rick Salutin has written award-winning drama (Les Canadiens, 1837), fiction (A Man of Little Faith), and journalism (op-ed columnist for The Globe and Mail 1991-2010 and the Toronto Star since then). He has taught almost continuously, in some manner, since he was about 15, including a course in the Canadian Studies program at University College, the University of Toronto, since 1978.

Rick Salutin is one of Canada's great thinkers. He understands the importance of culture, of true democracy, and, maybe even more importantly, he understands that conversations about our public institutions are never simple. In this book, Salutin demonstrates that the conversation about public education is exciting, complex, and rife with possibility. He manages to simultaneously challenge the status quo while mounting a strong, articulate, and nuanced defence of public education as one of Canada's greatest accomplishments

Rick Salutin, author of Keeping the Public in Public Education, is the winner of the Lamp of Learning Award presented June 1st, 2012, by the Ontario Secondary School Teachers' Federation.

And here's another excellent review, from The Rover :

When thinking back to one’s favourite teachers, it is difficult to put a finger on what made them memorable or particularly formative. It is also difficult to say what all good teachers have in common, except maybe a willingness to adapt. Bad teachers certainly have more in common than good ones; bad teachers think too much in terms of right and wrong, this way or that. But on a larger scale, it’s the system that makes or breaks the quality of education. Rick Salutin’s essay “Keeping the Public in Public Education” examines the public school system and its many downfalls. The system’s focus on standardized testing, the growing number of educational choices (arts schools, “gifted” programs, etc.) are elucidated by Salutin in his impassioned argument for reimagining education in Canada and abroad.

“What works, works,” Salutin writes. Don’t be dogmatic. There are many right ways, there are certainly wrong ways, but there isn’t one of each. The “what works, works” mantra is refreshingly simple because of our tendencies towards offering answers, insofar as something that we’ve found successful we will endorse for others. But as Salutin examines various successful public school programs in Canada, which are sadly few and far between, it becomes apparent that the one-size-fits-all mentality is the norm.

Comfort can be taken, however, in that some things are being done right. Salutin has nothing but praise for Pathways to Education, a successful equity program in a low-income neighbourhood in Toronto. With many incentives, mostly financial, keeping the students in school, the numbers indicate the program’s staggering success: the graduation rate for students in the program is 93%. Another successful program focusing on aboriginal students in Saskatchewan has also shown particular merits. These programs are vastly different, but they work because they are catered to a particular community.

Salutin goes on to examine the phenomenon of charter schools in the United States which are funded by public money but whose students are admitted based on a lottery system. Salutin calls charter schools quick fix for the test-score oriented, and believes them to “undermine the only real choice for most families: public schools.”

Salutin also makes the argument against school choice using Toronto as an example. With a wide selection of public schools focusing on various disciplines, be it French, arts, or “gifted” programs, choosing which high school to go to becomes tantamount to choosing which college or university to attend. Salutin argues that specialized schools deprive children of exposure to different kinds of people with different modes of learning. More importantly is his point that specialty schools take the focus away from improving public schools as a whole: if there is a French school, an arts school, and a school for gifted children, then the weight is removed from the neighbourhood schools to improve their own programs. This “privatizing from within” may be good for some, but comes at a very real cost to many more.

Turning the focus overseas, Salutin uses Finland as an example of a public school system whose entire structure points to its success. Educators in Finland are as esteemed as doctors or lawyers, they all have Masters degrees, and they must go through rigorous application procedures. Children don’t begin attending school until they are 7 years old, and they spend fewer hours in a classroom as compared to Canadian students. The high school graduation rate is 93% compared to Canada’s 76. Maybe most importantly, as it reflects the value of education, the teachers are paid very well.

What Salutin concludes is that while “almost anything will work,” the structure must be in place to allow teachers to try new things and support them in the possibility of failing. Finland consistently scores very highly on standardized tests precisely because they are not the goal, but rather a product of a well-designed and well-supported public school system.

Just What the Doctor Ordered

A review of Keeping the Public in Public Education by Rick Salutin, Linda Leith Publishing, 2012. ISBN 0987831720, by Annie Kidder.

This series of short essays should be required reading for educators and education advocates everywhere. In saying this, I have to confess a certain bias – and one caused not only by my strong belief in public education. Rick Salutin is a personal friend. He’s also a well-respected journalist and social critic whose ideas strike a chord with thoughtful readers of various opinions.

Teachers will find this little book (it’s just 64 pages) heartening, administrators will feel their problems are recognized, and those of us who believe that public education is one of Canada’s greatest gifts to its citizenry will now have new tools to back up our claims.

At a time when many of our public institutions are being dismissed as unnecessary, inefficient, or the product of outdated lefty beliefs, Salutin comes out swinging in favour of public education and against the trends toward privatization, corporatization, the free market, and deregulation that he sees threatening it. In this series of articles (originally published in theToronto Star in 2011), he looks at testing and accountability, school choice, equity, teaching, and what defines the “public” in public education. He argues that society’s current love-in with the free market is based more on faith than on evidence, and he urges us to protect public education from the ever-encroaching “religion” of privatization.

In the opening chapter Salutin examines the intangible qualities that go into making a great teacher. It’s all about the magic that happens “after the door closes.” What do we remember about the great teachers from our childhood? “Was it some info they passed on, or was it something they ignited in you? Probably the latter…ignition is the ticket…And since it’s a relationship, almost anything can and does work.”

Education reformers, he says, speak out of both sides of their mouths. “They say ‘there is no one best way.’ Then they list dozens, or more, of specifics...” In making the case for teacher autonomy, he points out that Finnish teachers have a sense of professional control and responsibility, and Finnish students consistently come out on top in international comparisons.

In the belief system of the free market reformers, school choice looms large. Salutin argues that, while choice might be good for some students, specialty and alternative schools threaten to “drain the life out of the public system.” He worries that middle or upper class families, looking for a form of private schooling within the public system, are “cannibalizing and undermining the mainstream schools.” Alternative, specialty, and even French Immersion schools break down cohesion, take the pressure off the system to improve for all kids, and fragment rather than integrate. Salutin uses the integration of students with special needs to support his arguments against fragmentation. He says we have come to assume that students with special needs should be educated together with all other students, and he questions what may be a double standard for specialty schools.

In the section on testing, Salutin examines the current fixation on accountability. He warns against the danger that the measurable outcomes we have placed on our public systems – shorter waiting lists, better scores, higher rankings – end up defining what we do.

Salutin’s conclusions focus on equity and on the “new public” – a public vastly changed since the beginnings of Canadian public education. In examining the needs of that new public, he describes SchoolPlus – the Saskatchewan policy to support community schools – each one developed to serve its own unique community – where “tectonic shifts” are changing the way schools do business. He also looks at Pathways to Education, a program started in Toronto’s Regent Park and slowly moving to communities across the country, because it’s an example of how kids are served by supports outside the system.

Of the many important messages in this book, none is more important than its call for pride in the accomplishment that is Canada’s public education system.

Salutin wants to make sure we recognize both the reasons to be proud and the imperative to maintain a system we can be proud of.

Congratulations to Rick Salutin, winner of Lamp of Learning Award!

The Lamp of Learning Award, a silver replica of the symbolic educational lamp, is presented each spring at by the Ontario Secondary School Teachers' Federation to a resident of Ontario who has made an outstanding contribution to public secondary education in the province.  The winner is selected by a panel of judges on the basis of the nominee’s exemplary contributions to public secondary education in Ontario. Recent Winners include: