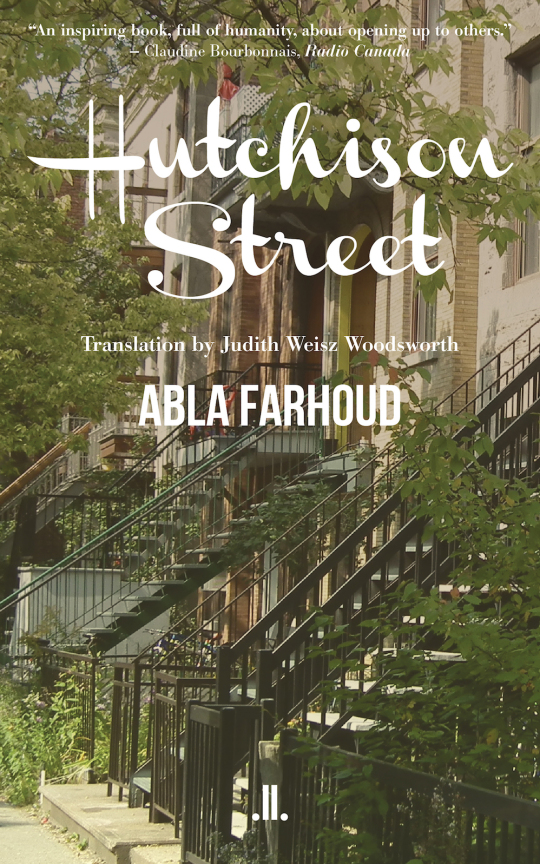 With one side in Mile End and the other in Outremont, Hutchison Street is inhabited by characters from many different backgrounds, including a community of Hasidim and a writer whose newest project is a novel about the people she has lived among for thirty-nine years. She traces the life stories of an aging singer, a bag-lady who feeds birds in a back alley, an Italian widow who grows tomatoes in her front yard, a Jamaican woman who longs to dance the night away, and a young Hasidic girl who keeps a diary.

A moving account of isolated individuals attempting to reach out to one another in one of Montreal’s most diverse neighbourhoods.

Abla Farhoud is a Montreal writer of Lebanese descent. She was an actress before becoming a playwright, and completed a master’s in theatre arts from the University of Quebec in Montreal. In addition to several plays, she has published five novels and has achieved considerable acclaim in French.

Judith Woodsworth is Professor of translation and translation studies in the French Studies Department at Concordia University. She has translated two novels, Still Lives by Pierre Nepveu and Hutchison Street by Abla Farhoud. She lives in Montreal.

Memorable characters from all walks of life

The first of Farhoud’s novels to be translated into English, Hutchison Street retains the cadence and flavour of a francophone novel. Farhoud writes convincingly from both an outsider’s and an insider’s viewpoint, celebrating the diversity and energy of the book’s Montreal neighbourhood: “That’s what makes Hutchison Street so unique, a street split between Mile End and Outremont. Between Yaveh, God, Allah … or none of the above.”
Read more.
November 2018, Montreal Review of Books

A joy to read

It was a real joy to read Hutchison Street, for all the stories were more or less told in a positive light, and the majority of the street’s residents were more than happy to live there. For anyone who has lived in a multicultural neighbourhood, Hutchison Street will undoubtedly bring back some memories. I rated it four stars at Goodreads and I will put it on my 2019 longlist for “The Very Best!” Book Awards for Fiction.
Read more.
September 2018, Miramichi Reader

A street at the heart of Montreal

Farhoud’s approach to Hutchison Street is lyrical and searching, a celebration of the street’s history, variety and potential. Hutchison Street draws a map, a rectangle of streets representing the small section of Montreal where its action takes place, with Rue Bernard as its northern border, Mount Royal Avenue is to the south, Parc to the west and Hutchison in the east. The rest of the city falls away as if it didn’t exist, the point being that Hutchison Street is itself a kind of self-contained village in the centre of a big city. Its occupants watch each other from balconies; they stop to chat on street corners; and houses stand side-by-side, while buildings divided into flats create even closer living quarters. People walk to do their shopping, to go to synagogue and to unwind after a busy day.

... Farhoud’s triumph in Hutchison Street is her willingness to avoid the common, even stereotypic, approaches to the street’s cultural divide. For her, it is a kind of theatre of everyday life, a true democratic place of meeting, of discourse and of belonging. Her pursuit of this aspect of contemporary Montreal is provocative and timely. As Abla Farhoud's characters see things, "Hutchison is not a problem street. It is an urban paradise, a theatre of potential discovery."
Read more.
May 2018, Canadian Jewish News

Characters as believable as their stories

Richard King‏ @richardking18
@cbcHomerun we talked about , by Abla Farhoud. The novel beautifully recreates the neighbourhood in which it is set. The characters are believable as are their stories. @AbFarho @LL_Publishing