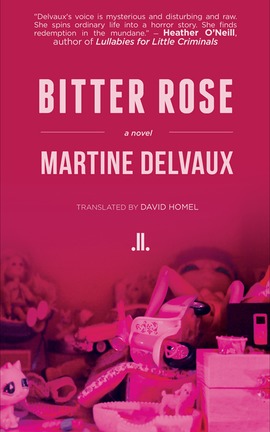 This title is now out of print.
A little girl is growing up in an Ontario village. Her father has taken off, and the world is full of dangers she doesn't understand. Her friends have names like Manon-just-Manon, BB, and Valence Berri, and things seem pretty okay, most of the time, except that girls keep disappearing. When she leaves the village for a suburb of Ottawa and then moves downtown and beyond, she never looks back.

Martine Delvaux was born in Québec City and brought up in a francophone village in Ontario. Her most recent books in French are an essay on photographer Nan Goldin and another on Serial Girls from Barbie to Pussy Riot (forthcoming in translation from Between the Lines). Delvaux studied in the United States and England and now lives in Montreal, where she teaches women’s studies at Université du Québec à Montréal. White Out (translated by Katia Grubisic) was published by LLP in 2018.

David Homel is an award-winning novelist and translator. He has won the Governor General's Award twice for translation. He has also worked as a filmmaker, journalist, and teacher. His most recent book is his memoir, Lunging Into the Underbrush: A Life Lived Backward (LLP, 2021). He lives in Montreal.

June 17, 2015: "Fans of the gritty realism in works by Quebec authors such as Heather O'Neill or Rawi Hage will find another favourite in Delvaux." -- Dory Cerny, review of Martine Delvaux's novel Bitter Rose, translated by David Homel, in The Humber Literary Review (Spring-Summer 2015, p. 54).

March 27, 2015: Bitter Rose author Martine Delvaux and the disappearing girls who haunted her childhood are featured in this Gazette piece by Ian McGillis.

“Martine Delvaux’s Bitter Rose delivers a poetic stream of consciousness rant from a young female seer born to prophesize in the most unlikely of places: a French-Canadian suburb in the 1970s and 1980s. Delvaux's voice is mysterious and disturbing and raw. She spins ordinary life into a horror story. She finds redemption in the mundane. Her girls are ugly on the inside, and therein lies their strange, explosive beauty.”
– Heather O’Neill, author of Lullabies for Little Criminals

“A twisted fairy tale, Bitter Rose is utterly compelling. The distinctive voice of the young heroine hooks the reader from the first page. The world of girls and women it presents is precarious; as deceptively fragile as the high-rise turret the narrator lives in as a small child. With its sense of threat underlying the daily routines of 70s life built around Dairy Queen, swim-class and Charlie’s Angels, Martine Delvaux’s novel offers us a glimpse of the suburban sublime.”
– Ceri Morgan, author of Mindscapes of Montreal

“I came into a world where no one spoke of men, they were not a subject of conversation because they didn’t really exist, or only as grandfathers, bosses, neighbours, doctors. Life was lived among girls. There was my grandmother and her slow-witted but malevolent sisters. There was my mother who worked all the time. And there was me.”

27 March, 2015: Ceri Morgan interviews Martine Delvaux, author of Rose amer, which is published in an English translation by David Homel as Bitter Rose (Linda Leith Publishing, 2015). Part I of the interview is here, and Part II is here.