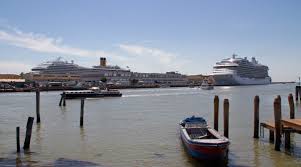 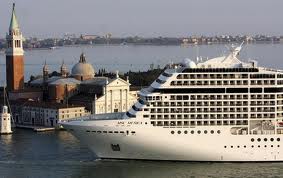 The first time I became aware of ocean liners coming into Venice was in 1995.  My wife and I and our two daughters were staying in a rented apartment for a month close to the Giardini Pubblici (Public Gardens), which are located at the beginning of the downward sweep of the bottom tail fin of the city.  This was a great location for our summer holiday because we were close to one of the last vaporetto stops between Venice and Lido. So every day, we’d walk down to the Giardini stop, hop onto the vaporetto, and take the girls to the Lido beach. That boat ride alone was a vacation for our souls as we cut through the warm waters and took in the beauties of Venice and its lagoon: the gardens on the shore to our left, the receding domes of San Giorgio and Santa Maria della Salute behind us, and the long straight stretch of Lido before us, all punctuated by the lines of wooden piles that thrust out of the lagoon to mark the invisible navigable canals.
One day we had a surreal experience. As we turned the corner to walk down to the water and the vaporetto stop, we found that we could no longer see the lagoon. What we faced instead was the massive white hull of a ship that had docked by the Giardini. It was the Crystal Harmony: 241 metres long, with a crew of 545 and a guest capacity of 904. From the speakers on all the decks a voice announced that, in ten minutes, passengers were to disembark for their first tour of Venice. My stomach clenched at the thought that the hordes of eager tourists now racing the decks would soon descend onto the quiet Riva dei Sette Martiri (Bank of the Seven Martyrs)—which I’ve come to think as being appropriately named for this kind of mass assault.
In subsequent trips to Venice we’ve stayed on the island of Giudecca in an apartment owned by one of my wife’s cousins, so I’ve become even more aware of the cruise ships as they take the route though the Giudecca Canal. The apartment is close to the tail of the eel. The kitchen window looks across the Giudecca Canal towards San Marco and the Doge’s Palace. When we sat at the kitchen table, we had an excellent view over the neighbouring rooftop of that postcard scene—except during those daily interludes when one of the cruise ships was gliding massively to or from port. At those times, San Marco, its bell tower, and the Doge’s Palace were obstructed for several minutes, and all we could see from our third-story window was the floating behemoth’s upper decks, stacks, and bridge.
On a number of occasions we’d watch these great vessels from water level as we strolled along the fondamente (banks) of the Giudecca. One of the most impressive was the Costa Mediterranea, a ship of 85,000 tons and 292.5 metres in length, which carries 902 crew members and 2680 passengers.  But this isn’t even the biggest of the ships. More recently, in June of 2012, Venice was visited by the MSC Divina, which weighs just over 139,000 tons (three times the tonnage of the Titanic), carries 3500 passengers plus 1325 crew members, and measures 333 metres long, more than the entire width of the Giudecca Canal. The MSC Divina is even bigger than the Costa Concordia (114,000 tons), which on 13 January 2012 crashed onto a granite ledge off the Tuscan island of Giglio. It dizzies the mind to imagine a ship that size capsizing where the Mona Lisa landed in 2004, within reach of Piazza San Marco and the anal end of the Grand Canal.
The presence of these giants looming over medieval and Renaissance treasures raises the anxiety level of all lovers of history and art—so much so that, following the Mona Lisa incident, Vittorio Sgarbi, Undersecretary of Culture, stated categorically that the largest vessel entering Venice’s waters should be no bigger than the Bucintoro—the Doge’s ceremonial craft (34.8 metres long, 7.3 metres wide, and 8.4 metres high). According to Sgarbi, to allow entry to any ship bigger than the Bucintoro is to impose a foreign aesthetic on the city, whose skyline is defined by San Marco’s bell tower and the Doge’s Palace. Those are the sights that tourists want to see when they come to Venice. To place a ship in front of those sights is, in Sgarbi’s words, an act of “aesthetic pollution” and an affront to the “dignity of the city.”
If he had been speaking analogically, he might have said, “let’s remember that Venice is a fish, after all. She sprang from the lagoon like a miraculous birth. If she is to swim freely, her waters must be respected and protected. How can we allow these titans of steel and smoke to threaten the vitality of the most original city in the world?”
How can we, indeed! 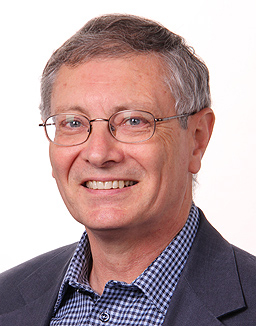 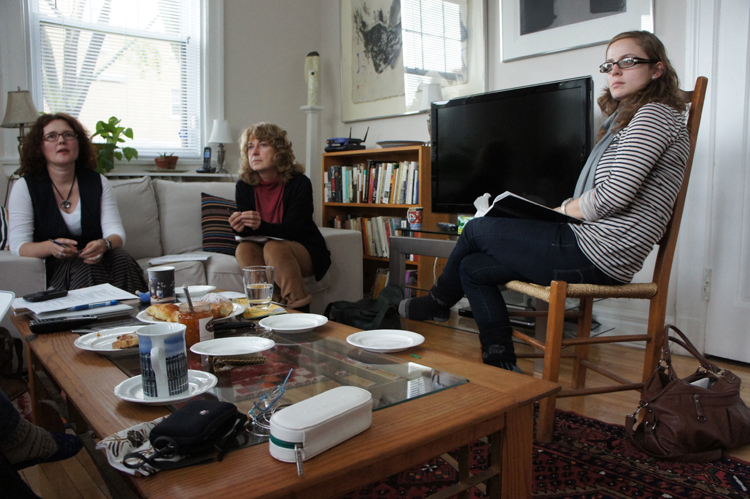